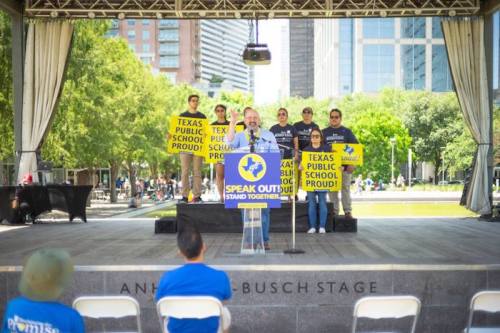 With all precincts reporting, Democrat Jon E. Rosenthal has narrowly defeated Republican incumbent Gary Elkins in the race for Texas House District 135 with 50.8 percent of the vote.

In a Nov. 7 phone call, Rosenthal attributed his victory to the effort from his team of volunteers and backing from the Cy-Fair branch of the American Federation of Teachers.

"We had over 100 people volunteer for the campaign, making phone calls and knocking on doors, and it all came together at the end," Rosenthal said. "I’m overwhelmed with emotion. I just can’t wait to actually start doing this work."

Heading into the election, Rosenthal said his priorities included providing better funding for public schools and expanding Medicaid as well as criminal justice reform. He said those priorities will remain his focus when the 86th Legislative Session begins in January.

"The things we’re going to focus on are the things that our constituents talked about," Rosenthal said. "We’re going to address education first and health care second. There’s a lot of agreement about certain measures that can be taken in pretty short order in both of those situations."

Elkins has served as state representative in the district since 1995. He ran unopposed in the Republican Party primary in March, and his most recent victory came against Democrat Jesse Ybanez in 2016, where he earned 54.9 percent of the vote. A total of 59,587 voters cast ballots in the District 135 race that year, compared to 55,831 in 2018.

Rosenthal led Elkins by only 427 votes at the conclusion of early voting, but finished the night with a 1,713-vote lead. Libertarian Paul Bilyeu finished the day with 1.5 percent of the vote, or 860 votes.

District 135 is one of the few Houston area State House seats that is changing hands from Republican to Democrat. Democrat Gina Calanni currently leads State Rep. Mike Schofield in the race for Texas House District 132 by less than 50 votes, but candidates are waiting for a final count on mail-in ballots.

With 93 percent of precincts reporting in the race for Texas House District 135, Democrat Jon E. Rosenthal appears poised to defeat Republican incumbent Gary Elkins, who has served as state representative in the district since 1995.

Rosenthal has 50.2 percent of the vote to Elkins' 48.3 percent. Rosenthal's narrow lead has grown from 427 votes at the conclusion of early voting to 1,032 toward the end of Election Day. Libertarian Paul Bilyeu finished the day with 1.6 percent of the vote, or 843 votes.

This story will be updated the morning of Nov. 7 with final vote totals and comments from candidates. All results are unofficial until canvassed.

With 19 of 30 precincts reporting, Democrat challenger Jon E. Rosenthal is maintaining his narrow lead over Republican incumbent Gary Elkins in the race of Texas House District 135.

Libertarian Paul Bilyeu has captured the remaining 1.5 percent of the vote, a total of 739 votes.

With early voting results in, Democrat Jon E. Rosenthal holds a narrow lead in the race for Texas House District 135 with 49.9 percent of the vote, a total of 20,113 votes.

District 135 represents parts of unincorporated northwest Harris County, including the city of Jersey Village and the Copperfield area.

Elkins has been representing District 135 since 1995. He ran unopposed in the primary elections in March, and most recently defeated Democrat Jesse Ybanez in 2016 with 54.9 percent of the vote.

He listed his top priority as flood prevention, but said he was also working on property tax reform, measures to secure the state's border and efforts to support schools and teachers.

Bilyeu—the first Libertarian to run for District 135 since 2008—said, if elected, he would support any legislation that reduces government, including the elimination of property taxes and the introduction of legislation that begins the process of removing government from the education system.