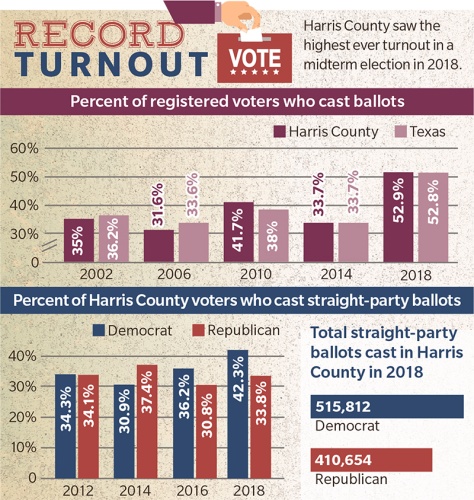 High voter turnout in Harris County and within the Cy-Fair area during the Nov. 6 midterm elections resulted in several seats at the state and county levels long held by Republicans falling under Democratic control.

A total of 515,812 Democrats cast straight-party ballots in the 2018 midterms in Harris County, compared to 410,654 straight-party Republican ballots, according to the county clerk’s office. Richard Murray, a political science professor and director of the Survey Research Institute at the University of Houston, said high Democratic turnout can be attributed in part to demographic changes in Harris County.

“You have more people moving in, we have more population as more adults are eligible to vote and ... have [had] a lot of legal immigration since 2007,” he said. “[We are] demographically dynamic.”

Local voting trends experts said high-profile races—such as the state’s U.S. Senate race, which set Democrat Beto O’Rourke against incumbent Republican Ted Cruz—helped push people to the polls in Harris County. A bevy of options to choose from in races down the ballot also spiked interest, said Marlene Lobberecht, president of the Cy-Fair chapter of the League of Women Voters.

“There weren’t many unopposed races,” she said.

Voter turnout in Harris County for the midterm election was the highest ever recorded for a nonpresidential election year, according to the Texas secretary of state’s office.

Approximately 52.9 percent of registered voters in Harris County cast ballots in the 2018 midterms, up from 33.7 percent during 2014 midterms.

Voter turnout in the Cy-Fair area was even higher. A total of 41 of 59 Cy-Fair area voting precincts saw turnout higher than the county average, according to county data.

The three factors most associated with voter turnout are age, income and education, said Mark Jones, a political scientist with Rice University.

The 2018 midterms were the last major Texas election in which straight-ticket voting was an option, allowing voters to push one button to select all candidates from one party. During the 85th legislative session, lawmakers passed a bill ending the practice beginning in 2020.

“Seventy-seven percent of the people voted straight ticket, and the margin of Democrats over Republicans is 105,000. … There aren’t enough non-straight-ticket voters out there to make up the difference,” Emmett said after a Nov. 13 Commissioners Court meeting.

Hidalgo said while straight-ticket voting played a role in her victory, her campaign and the Harris County Democratic Party worked to get people to come out to the polls for candidates in positions such as the one she sought.

Hidalgo was not the only new Democrat to be elected to the court. Former Harris County Sheriff Adrian Garcia also won his bid to unseat Precinct 2 Commissioner Jack Mormon.

In unincorporated parts of Harris County such as Cy-Fair, where there is no local municipal government, the county is the primary local body of government. Although Commissioners Court does not have the power to pass ordinances, it has limited regulatory power that can affect unincorporated areas, Murray said.

Hidalgo said her priorities will include overhauling the criminal justice system, improving transparency and continuing efforts to curb flooding. As for initiatives the current administration began, such as projects that are part of the $2.5 billion Harris County Flood Control District bond approved in August, Hidalgo said she will work with colleagues to determine if changes are necessary.

A shift in criminal courts at law could also change the way the county handles issues such as bail bonds, Murray said. Harris County’s bail bond practices have been the subject of an ongoing lawsuit since 2016.

The suit alleges the county unfairly jails those charged with misdemeanors who cannot afford bail. A federal district judge ordered the county to remedy the situation, but the suit has been held up in the U.S. 5th Circuit Court of Appeals.

All Republican criminal court at law judges named in the suit were replaced by Democratic candidates in November.

The Texas House seats won by Rosenthal and Calanni were among 12 seats statewide that flipped from Republican to Democrat. Rosenthal’s seat—District 135—covers Jersey Village and Copperfield. Calanni’s seat—District 132—covers western Cy-Fair and Katy.


The 12 flipped House seats could affect what issues lawmakers try to tackle during the legislative session, Jones said.

Rosenthal said addressing public education funding and expanding health care access are among his priorities. He said both topics are things he said he heard repeatedly from constituents while on the campaign trail.

“There’s a lot of agreement about certain measures that can be taken in pretty short order in both of those situations,” he said.