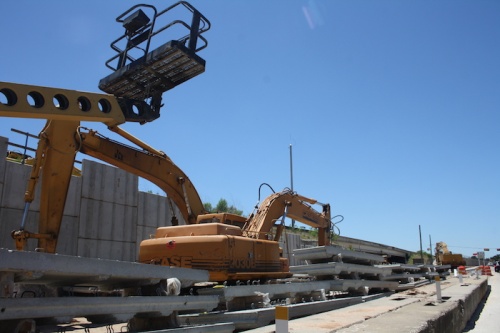 Crews will reach another milestone on the Hwy. 290 widening project next week.

Officials with the Texas Department of Transportation said they anticipate reaching another milestone the morning of Monday, Dec. 17, in the ongoing effort to widen Hwy. 290 between Loop 610 and the Waller County line.

The newest milestone will take place squarely in the Cy-Fair area. Crews plan to open one additional eastbound main lane from Barker Cypress Road to North Eldridge Parkway, bringing the total usable main lanes on that stretch of roadway up to four.

The Hwy. 290 high occupancy vehicle lane will also be extended an additional 2.5 miles westward beyond where it currently ends near North Eldridge Parkway. The eastbound entrance/westbound exit at North Eldridge Parkway will be permanently closed, and a new one will open west of Huffmeister Road, TxDOT officials said in a press release.

The opening of new lanes is the latest of several milestones reached by TxDOT in 2018. Work finished Sept. 17 on Hwy. 290 westbound main lanes between Pinemont Drive and West Little York Road, providing five main lanes in each direction between West Little York Road and Loop 610. Main lane widening from the Grand Parkway to Waller County was completed in April, where four lanes now run in each direction.

Police officers will be on site to direct traffic, but TxDOT is encouraging drivers to find alternate routes.

TxDOT will also host a US 290 Fair and Fest from 10 a.m.-1 p.m. on Dec. 15 to celebrate the work completed on the highway so far. The event will begin with a ceremonial program and will also include family-friendly entertainment and exhibitors from the Hwy. 290 corridor. The event takes place at the West Little York Park and Ride facility at 15010 Hempstead Road, Houston.