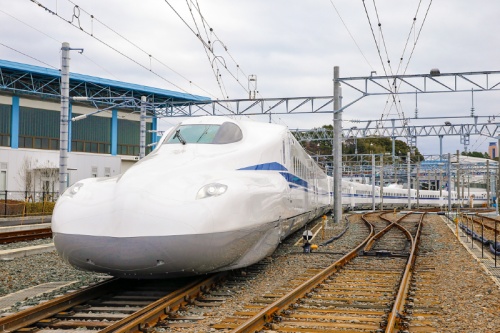 Correction: A previous version of this story insinuated that Texas Central is producing the final environmental impact statement. It has been updated to clarify that the EIS is issued by the Federal Railroad Administration. A previous version also stated that Texas Central conducted a survey of 2,000 Texas drivers in 2016. This survey was actually conducted by L.E.K. Consultants.


A proposed project to transform the way Texans travel between the state’s two largest cities could be under construction next year and up and running by 2024. However, opposition groups question the viability of the project, which calls for building a 240-mile high-speed rail line between Houston and Dallas.

First announced in 2012, the Texas Central Railway would travel as fast as 205 miles per hour. It would be the first high-speed rail line in North America, according to officials with Texas Central Partners, the private group developing the project.

Momentum for the project has been growing, said Holly Reed, managing director of external affairs with Texas Central. In September, the company announced it secured a $300 million loan from the Japan Overseas Infrastructure Investment Corp. and the Japan Bank for International Cooperation. Reed said the loan provides funding for all aspects of the project up through construction and indicates the rail line is capable of attracting investor support.

“This loan is important for many reasons,” she said. “This loan shows that somebody has looked at our business plan [who] is a major global financial player and made a loan to the project.”

In October, Texas Central brought on Spain-based Renfe as an operating partner. Renfe has 25 years of experience operating high-speed rail in Europe.

Early on in the process, officials with Texas Central had hopes that construction could begin as early as 2016—a timeline that depended on factors outside of Texas Central's control, including the environmental surveying process. Since a draft environmental statement was issued by the Federal Railroad Administration in December 2017, Texas Central officials have given 2019 as a target for when construction could begin, but outside factors could result in this timeline changing again.

Opponents of the rail line question how the train will be funded and whether Texas Central will be able to acquire the land needed from private landowners along the proposed route.

Kyle Workman, a Leon County resident and chairman of Texans Against High Speed Rail, a group opposing the rail project, said he does not think the project will ever come to fruition, and if it does, it will not catch on in Texas.

“Here in Texas we have high car ownership and low population density,” he said. “Anywhere high-speed rail is reasonably successful has the opposite. That’s a multigenerational thing, it doesn’t happen overnight.”

It a draft environmental report issued by the Federal Railroad Administration last December, federal officials confirmed a need for a multimodal transportation option to alleviate congestion between Houston and Dallas, which is expected to worsen as populations in those two cities continue to rise.


A preferred route for where the rail line would run was identified in December, Reed said. Since then, Texas Central has been looking at the granular design details of how the rail line will be built, she said. Engineering work is ongoing, and Texas Central officials hope the FRA issues the final environmental impact statement next year and to be able to start construction soon after.

The rail line would take riders from Houston to Dallas in 90 minutes, Reed said. The preferred route features a stop in Grimes County near Texas A&M University, while the Dallas stop will be located in downtown Dallas.

A Houston-area stop has yet to be finalized, but the preferred stop for Texas Central is near the intersection of Hwy. 290 and Loop 610, the former location of the Northwest Mall, Reed said.

“The Northwest Mall location is exceptionally well-suited to deliver people downtown, to the [Texas] Medical Center, to the Energy Corridor,” she said. “[The Metropolitan Transit Authority of Harris County’s] Northwest Transit Center is also right there, which is an added benefit.”

The proposed track runs through the Cy-Fair area along an existing Union Pacific Corp. line near Hempstead Road. The route will pass near some residential areas in Cy-Fair that come up to the south side of Hwy. 290, as well as Cypress Falls High School, and the southern portion of the city of Jersey Village, where city officials are looking to build a high-density mixed-use center. An estimated 50 homes in the White Oak Falls subdivision along Hwy. 290 will likely be affected under the proposed route.

Jersey Village City Manager Austin Bleess said the city has been briefed on multiple occasions by Texas Central regarding the route through Jersey Village, and he does not anticipate any negative effects on the city.

Reed said the engineering process will determine where and what kind of noise-mitigation elements will be needed, but said she thinks people will be surprised by how quiet the rail is.

“You have to think differently about what a train is,” she said. “[It uses] overhead electric, so there’s no big heavy engine on the front. It never crosses a road at grade, so there’s no clanging and no whistle on the train. It will be the quietest train experience anyone has had.”

Allan Rutter is the division head of freight mobility and infrastructure investment analysis with the Texas Transportation Institute, a research agency based out of Texas A&M University. He said one of the major questions that will need to be answered before construction begins is how Texas Central will raise the funding needed to build the line, estimations of which have fluctuated from $12 billion to $18 billion and which oppositions groups think could end up being even higher.

Reed said construction will not begin until financing is in place, but Texas Central is optimistic about attracting investor interest.

“There is a lot of appetite to invest in infrastructure right now and few projects that are at the phase where they are ready to be invested in,” she said.

Although Texas Central will not seek federal funds, Reed said it could use federal loans designed to promote private investment. Any loan would be paid back with interest, she said.

The state of Texas has already taken measures to ensure the rail line is not funded with state money. Following the 2017 legislative session, Texas Gov. Greg Abbott signed a bill prohibiting the state from providing funding for any high-speed rail project. The bill was co-authored by several Houston area legislators, including Lois Kolkhorst and Brandon Creighton. Texas Central officials point out that they did not oppose this bill, and the end result of the 2017 legislative session did not include any bills that would hinder the rail line from moving forward.

Opposition groups are skeptical that Texas Central could attract enough riders to be profitable. Workman said he fears if the rail line does not generate a profit, it would eventually require government intervention to stay afloat, turning into a taxpayer bailout.

"High-speed rail worldwide is subsidized," Workman said. "It is not a money-making ordeal. It’s a transportation solution."

Texas Central officials say assumptions that the rail would require government intervention are unfounded and unfair. They have countered that, because the rail is privately funded, its commercial success has been given a much higher priority compared to publicly sponsored lines. The company has referenced the existence or profitable lines connecting Madrid to Barcelona and Tokyo to Osaka.


Approximately 90 percent of the 16 million people who travel between Houston and Dallas annually make the trip by car, Reed said. In a 2016 statewide survey, L.E.K. Consultants interviewed 2,000 Texas drivers. About 83 percent of them said they would consider using the rail line if it was built, Reed said.

“It only takes a small portion to get on the train for our business plan to be successful,” she said. “People are open. Part of that is due to the place we are in our transportation evolution.”

Rutter said whether the rail line catches on with Texans will depend on ticket price, future urban congestion and how much people value their time. He said potential investors will likely do their own assessments of Texas Central’s ridership projections before committing capital.

Before moving forward with construction, Texas Central will also need to obtain land along the rail's proposed path. The process could entail the need to use eminent domain—the power to condemn privately owned land and take ownership of it while compensating the land owner—but officials with Texas Central said they would only use that authority as a last resort and are hopeful they would not have to use it at all. The rail's path along existing utility lines was chosen in part to minimize effects on landowners along the route, officials said.

A default judgment from Harris County Judge Steven Kirkland in 2017 also called Texas Central a railroad company, but this judgment has since been challenged by opposition groups. A case is currently playing out in a Leon County district court over whether Texas Central has the right to survey land without the landowner's permission, a ruling Workman said also ties into eminent domain use and could be decided soon, although there is no concrete timeframe.

Both sides of the debate are convinced they are right. In Texas, a railroad company is defined as a company “operating” a rail line, which Workman said disqualifies Texas Central due to the term being in the present tense.

However, Reed said she is confident the company will be recognized as a railroad company.

In the meantime Texas Central is not able to access property if the land owner denies their access. According to the draft statement released in December, somewhere between 7,957 and 8,218 acres of land will need to be acquired for the project. Texas Central announced in 2017 the company had about 30 percent of the parcels needed, a number that has not been updated since.

(Following the publication of this article, Texas Central released a statement to Community Impact Newspaper clarifying that surveying efforts related to the draft EIS were able to move forward using other, acceptable methods to assess property conditions.)


Reed said Texas Central does not make announcements every time it acquires a new parcel, and that it was premature to talk to many of the landowners before the preferred alignment was identified last December. Talks with landowners have been ongoing, she said.

Workman said, regardless of the court case decision, the dispute over eminent domain may be far from over. He said a decision from the Leon County district court would likely be appealed, at which point it would go to the Waco 10th Court of Appeals. Either party could appeal that decision to the Texas Supreme Court, which could decide to hear the case or deny the petition.

“There’s no doubt in my mind it will go the Texas Supreme Court,” Workman said.

The line has garnered support from  several Houston-area transportation and development groups, including Transportation Advocacy Group, the North Houston Association and the Cy-Fair Houston Chamber of Commerce. Texas Central officials say the project could inject $36 billion in economic benefits into the state over the next 25 years.

Keith Vrana, co-chair of the Cy-Fair chamber’s transportation committee and co-owner of Consolidated Mills in Cy-Fair, said he thinks the rail line is one of the most important projects in the history of the state.

“We have to find alternatives that fit for Texas, and I am a big advocate for this one,” he said. “We can lead the country into a new transportation solution and paradigm.”