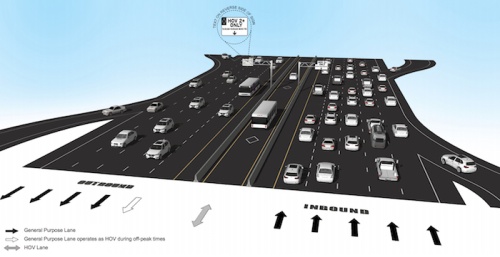 TxDOT is collecting public comments on a proposal to turn a Hwy. 290 main lane into an HOV lane during off-peak hours after a main lane widening project is completed.

The Texas Department of Transportation is collecting public comments on a proposal to convert a Hwy. 290 main lane to a high occupancy vehicle lane during off-peak hours.

TxDOT has given preliminary times of 5:30-9 a.m. and 3:30-7 p.m. for the off-peak HOV lane to be in effect, but officials said those times are subject to change. The lane would be available between W. 34th Street in Houston and Barker Cypress Road in Cypress.

The highway is currently under construction as a part of a project to widen main lanes between Loop 610 and the Waller County line. Work on main lanes is projected to be complete by the end of the year.

Part of the reasoning behind the change is to provide carpool drivers and METRO buses quicker access to the Cypress Park & Ride facility on Skinner Road, according to a TxDOT press release. The final Hwy. 290 configuration will also include a single reversible HOV lane down the center of the highway.

"Paired with the [Hwy. 290] barrier-separated reversible HOV lane, the project provides routes for HOV traffic in both directions during peak travel hours," the release stated.

A public meeting on the proposal has been scheduled for 6-8 p.m. Oct. 11 in the Jersey Village High School cafeteria, 7600 Solomon St., Houston. The meeting will be conducted with an open house format with no formal presentation.

Attendees at the meeting will be able to view information on the proposal—which is also available online—ask questions and submit comments. Comments can also be submitted via email to [email protected] or online. Comments can also be mailed to the TxDOT Houston District Office, Director of Project Development, P.O. Box 1386, Houston, TX 77251.
SHARE THIS STORY