Suspects that qualify for Harris County's new cite-and-release program are given a citation and a court date but can avoid arrest. (Courtesy Fotolia)

The program, known as cite-and-release, was first authorized by the Texas Legislature in 2007 and can be implemented at the discretion of individual law enforcement agencies. Under the law, a citation can be issued instead of an arrest for the following Class A and Class B misdemeanor offenses:


If a suspect qualifies for cite-and-release and a deputy decides not to grant it for any reason, such as if the suspect is deemed likely to not appear in court, that deputy is required to get supervisor approval and provide a report that gives a reason for not offering cite-and-release, according to a Feb. 4 executive order distributed by Gonzalez to all HCSO personnel. The order provided a list of circumstances that would disqualify a suspect from cite-and-release, including being younger than 17, having an outstanding warrant, being on parole, not being a resident of Harris County and being deemed a safety threat.

Harris County has also had a diversion program in place for misdemeanor marijuana offenses since 2017 that allows individuals to avoid arrests and citations if they agree to take a four-hour educational class. Unlike the marijuana diversion program, suspects cited in the new program will still have to appear for a court date.

An official with the sheriff's office said the county courts will be tracking defendant appearance rates for those who qualify for the program.

In a statement posted to Twitter, Gonzalez said the initiative will improve efficiency and save money by providing an alternative path for low-level offenders instead of having to spend two to three days in the Harris County jail before being released.
RELATED STORIES

"Our initiative is modeled after highly effective programs in other jurisdictions that have demonstrated strong results," he said. 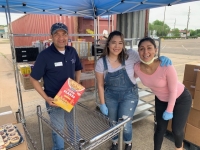