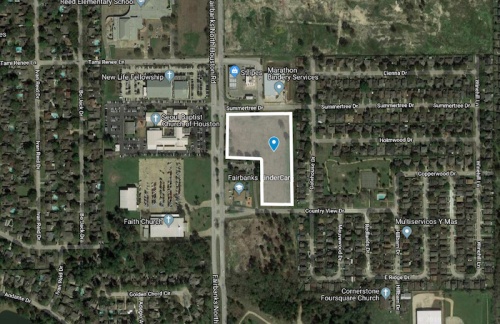 Harris County ESD No. 9 has purchased a 5.68-acre tract of land where a Cy-Fair Volunteer Fire Department Station will be relocated.

As part of efforts to relocate and update a fire station on Rodney Ray Road in Cy-Fair, officials with Harris County ESD No. 9 have purchased 5.68 acres of land where a new station is being planned.

ESD No. 9 is the emergency services district that manages the Cy-Fair Volunteer Fire Department. The land—located at the southeast corner of Fairbanks North Houston and Summertree roads—was purchased for $1.9 million, ESD No. 9 Commissioner Tommy Balez said.

The site will be the location of CFVFD’s new Station 1. The department's current Station 1 is located at 9202 Rodney Ray Road, Balez said.

“This new station will provide a modern, updated, four-bay facility, which will improve response times for the eastern area of our territory,” he said. “We hope to begin construction on the new Station 1 in 2020.”

Balez said the department will keep the old Station 1 site, which is also the location of one of its radio towers.

ESD No. 9 celebrated the opening of Station 13 in the Bridgeland area in 2018. Fire fighters also moved into a new Station 9 on Cherry Park Drive in November, and land was purchased to relocate Station 5 in December.

Construction will start on the new Station 5 in 2020, Balez said. Preliminary plans for the department’s 14th, 15th and 16th stations involve placing them at FM 529 and the Grand Parkway, in the Towne Lake area, and in the future Dunham Pointe area, respectively, Balez said.

Long-term plans involve bringing the total number of stations up to 22, Balez said. Although a lot of focus has been on the western side of the district, future stations will also target the eastern side, he said.

“We have been actively looking for sites to improve our facilities and response times in the eastern portion of the territory,” he said. “However, finding usable sites is difficult since it is a much more developed area. We have a number of other locations that we are in the process of purchasing, and I hope to announce those in the upcoming months.”

Correction: This new station on Cherry Park Drive is Station 9.