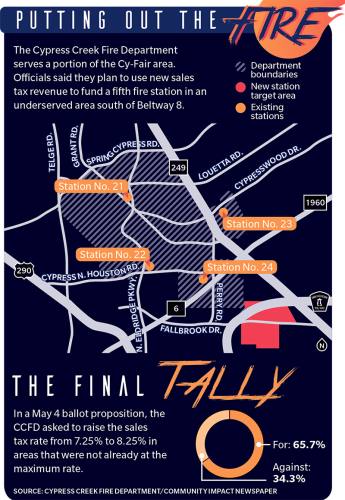 Voters approved a ballot proposition May 4 that will allow Harris County Emergency Services District No. 13—which operates as the Cypress Creek Fire Department—to collect a portion of sales tax revenue on goods and services sold within its boundaries.

Officials said the measure, which passed with 65.7% of the vote—will help fund the construction of a fifth fire station in the southern portion of the district along with a new fire engine and new personnel.

The department is in the process of securing land for the new station within the target area and hopes to close on a deal within the next few months, Lieder said. He said the station could open by 2020 or no later than mid-2021.

The new station is part of a larger effort to drive down response times, Lieder said. Over the past five years, the district has shifted from a predominantly volunteer organization to a combination of about 160 full-time and part-time employees and volunteers working 24/7 at four fire stations, he said.

The measure will generate an estimated $1.1 million for the district annually, Lieder said. The estimated cost of the new station includes $400,000 for a loan payment for the land and construction, about $700,000 for a new engine and $835,000 per year for the 12 new personnel that would be required to keep the station staffed 24/7, he said.

The new station will target the portion of the district to the southeast of Beltway 8 near the Sam Houston Race Park, an area Lieder said can be difficult to reach for firefighters at Station 24 on Perry Road, the next-closest station.

The response rate standards set for ESD No. 13 by the National Fire Protection Association call for the district to have 15 firefighters on the scene within nine minutes 90% of the time. The average response time for the district is six minutes and 40 seconds, Lieder said, but the drive time to the area south of the Beltway can be in excess of 14 minutes.

“The Gessner [Road] and Beltway 8 intersection is our main gateway into that part of the district, but traffic there gets notoriously bad at certain times of the day,” he said.

The area, which sat for many years as largely grassy fields, has also seen development pick up over the past few years, including new residential subdivisions, multistory office buildings and warehouses that can be in excess of 500,000 square feet, Lieder said.

“There’s a lot of demand for service down [there], and we are currently underserving that area,” Lieder said. “We’re probably down to the Sam Houston Race Park area at least once ... sometimes three times a day, for motor vehicle accidents.”

The fifth station will also have benefits districtwide, Lieder said. Right now, when the district has to respond to a structural fire, it has to dispatch firefighters from all four of its stations to meet NFPA standards, which leaves the rest of the district uncovered for a period of time, he said.

“With the addition of a fifth fire station in the district, we’ll dispatch four fire stations to the structural fire, and that will leave one of our fire stations—depending on where the fire is—in service,” he said. “We’ll then post that remaining engine company to kind of the geographic center of the district.”

The measure will raise the sales tax rate on goods sold in the district’s boundaries from 7.25% to 8.25%, but only in parts where the rate has not already been raised to the maximum amount by special-purpose agreements—agreements between local utility districts and the city of Houston that allow those entities and the city to collect sales tax revenue.

Simon Vandyk, a public information officer with ESD No. 13, said he estimated 90% of the commercial areas in the district are already at the maximum sales tax rate and would not see an increase.

“In the places that don’t already have an SPA in place, this just keeps that penny in Cypress Creek,” Vandyk said.