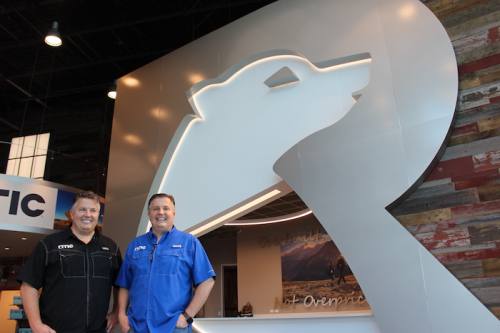 Jim (left) and John Jacobsen, founders of Rtic Outdoors, stand in the entrance of a new retail store that will open to customers Nov. 17.

Brothers and Spring-area natives Jim and John Jacobsen thrive in fast-changing environments. In the three years since launching Rtic Coolers—now known as Rtic Outdoors—on Hempstead Road in Cy-Fair, the duo has overseen a company that has been in constant flux, whether it be the introduction of new product lines, changes in distribution models or the expansions at their warehouse and corporate office.

With the launch of Rtic Outdoors on Nov. 17, the Jacobsens are aiming to create a new identity for a business that, up to this point, has been mostly known for its drinkware and coolers. With new products on the shelf and more coming next spring—including barbecue grills, tents and lanterns—a new retail building, a new website and plans to enter 20 new markets across the U.S. in the coming years, the brother said they are ready for the journey ahead.

What does the change from Rtic Coolers to Rtic Outdoors mean for the company?

John: You’re more focused on the activities. What you now see [at our new retail store] are all the outdoor activities you can do with Rtic—camping, hiking, golfing, tailgating, yoga, rock climbing. It’s about the adventure, and how you can take Rtic along. We call it “overbuilt not overpriced”—you spend the money on the adventure, not on the gear.

Jim: At the same time, it’s a transition of our company brand, so that’s our new branding along with our website and that kind of stuff.

John: It’s a big unknown because we’re now going from our little bitty store to this big outdoor experience. I think [customers] will love it, but you never know until they start showing up.

How did you get the idea to move into outdoor products?

John: We do a lot just kind of by gut instinct. Like with the grills, we threw a picture out there on social media and it blew up. If we throw up something else and it gets a weak response, we probably won’t do that. There’s more to it than that, but we have over 2.2 million Facebook followers that we can turn to. We see what people are talking about, what they want.

The saying around here is that the only constant is change. We’re used to it. If you’re someone who doesn’t like change and uncertainty in terms of where we’re going to be next month, this is kind of a difficult place to be because we don’t know. It just keeps growing and growing.

Any other new products in the works?

John: We’re coming out with another company called Cuero. It’s going to be a high-end boot company, but the boots are going to be a lot more affordable. These are all hand-made type of boots. [We will] sell them directly to the consumer online. It won’t be just your traditional; we’ll have exotics like alligator [and] ostrich.

What’s the plan for launching stores in other cities?

John: The 20 stores we’re opening [will be] across 20 markets. It could be Orlando, Atlanta, Los Angeles, Chicago—obviously, the big cities. We’re going to roll [the Houston store] out, and if it does great during Christmas, we’re going to start rolling out the next ones in January. From thought to completion, it takes less than six months. Now we have the foot print. We learned some stuff—what to do, what not to do, what size it’s going to be, how you lay it out.

What would you identify as your keys to success?

Jim: Our number one ability is we’re agile. A lot of people can’t really function in an agile environment where things change.

John: We manage our business by the day, by the hour. Most people who are traditional retail are planning out what they’re going to sell next Christmas. We’re asking what’s going on with the environment today.

Jim: We’re quick to market new products, growing new technology, making decisions as far as expanding. That agility gives us a competitive advantage. Another key to success is low overhead. Margins are thin, so when competition comes in you can’t have extremely high prices, otherwise competitors will come in and start competing on your business.

What are the biggest challenges of running your business?

John: One of the struggles is trying to keep up with the rapid growth. As you get bigger and expand, it’s harder to manage.

Jim: That’s why you see a lot of retailers having problems transitioning from traditional retail into e-commence. Mechanically, they are not set up to handle the distribution and the processing of orders and all that.

John: It’s kind of just going through and doing it through an iterative approach. You can’t go in and build some fully automated system because we change so much you have to allow flexibility in the system in how you operate. You have to be very agile. That’s how we develop our software and how we run our business.

What will be your approach to running the company moving forward?

John: We’re direct-to-consumer. We do not go through the traditional brick-and-mortar [stores]. They are inefficient and want to take big margins. We can go and supply all our retail stores from our distribution, and we have a very efficient way of doing that through our shipper that other folks can’t do because they are not set up the way we are. It gives us kind of a competitive advantage.

Can we be a billion dollar, top line, direct-to-consumer brand? Absolutely. Five years? That’s kind of what I think we’re heading toward. It’s just staying focused on what we do [well] and coming out with products consumers want. A lot of things came together at the perfect time.