Local parents advocate for water safety in memory of their son 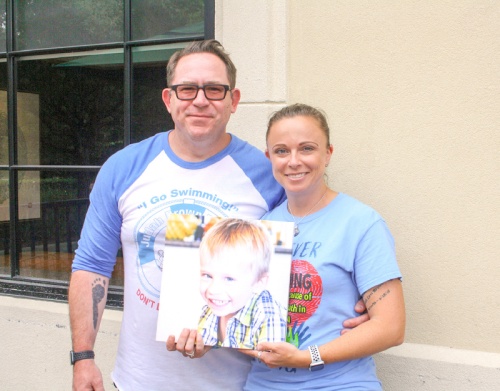 Mark and Christi Brown have been helping educate the community about drowning prevention since their son Judah passed away in 2016 after drowning in a pool at age 3.

When 3-year-old Judah Brown died after an accidental drowning in September 2016, his preschool teacher, Annette Courtney, called his mother, Christi Brown, and asked how she could help. Brown told Courtney she wanted other parents to know about the dangers of drowning before this happened to any other families.

“I was kind of angry that the pediatricians hadn’t told me any of this for any of my kids,” Brown said. “They talk about car seat safety all the time and won’t even let you leave the hospital without a properly fitted car seat. But they don’t talk about water safety, and yet it’s the No. 1 cause of accidental death [in children ages 1-4].”

The organization has since evolved to offer scholarships for survival swimming lessons for young children, education in schools, CPR classes and support to other families who have lost children to drownings, she said.

Brown said she thinks traditional swimming lessons—including those Judah had as a child—often promote confidence before competence. Alternatively, survival swimming lessons prioritize equipping children with proper skills, she said. Infants can start these one-on-one lessons as early as 6-7 months old.

According to the Centers for Disease Control and Prevention, formal swimming lessons can decrease the risk of drowning by 88% in young children.

“We don’t think swimming lessons should be a privilege,” she said. “We think they’re a right, and everyone has the right to learn how to save themselves in an emergency situation.”

In addition to ensuring children learn how to swim at an early age, the organization promotes additional layers of protection, including constant supervision.

Judah Brown Project ambassadors recommend designating responsible adults to act as the “water watchers” for 15-minute shifts at a time. During each shift, supervisors should devote their full attention to observing children in the pool, and supervisors of preschool children should be close enough to reach the child at all times, Brown said.

Flotation device safety education is another aspect of the organization’s work.

Brown said Judah wore a puddle jumper that gave him a false sense of security, making him think he could float any time he was in the water. He drowned after getting back into the pool without one, and she said it only took four minutes for his brain to be deprived of oxygen.

Since his death, more than 300 children across Texas have drowned, Brown said.

Judah’s father, Mark Brown, said he hopes to see the Judah Brown Project contribute to the eradication of child drownings and spread awareness about the issue until it rivals parent awareness about car seat safety.

“We want to present information to as many people as possible that, if we had read three years ago, we could have avoided tragedy,” he said.