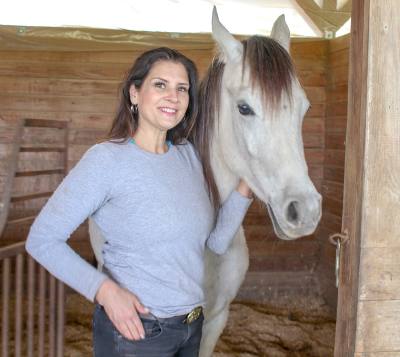 Megan Cardet founded A Place for Peanut in January 2016 with her late fiance, Bob Allen. She has since rescued more than 200 horses and continues to advocate to keep them out of kill pens.

Since its January 2016 launch, Cypress-based A Place for Peanut has rescued more than 200 horses from grim circumstances.

Founder Megan Cardet said unwanted horses or those sold at auctions often end up in kill pens. The ultimate fate for many is being transported to Mexico to be slaughtered for meat consumption in foreign countries, she said.

“It’s a dirty business, and there’s a lot of money in it,” she said.

A Place for Peanut was named after the organization’s first rescued miniature horse, and Cardet has found permanent homes for dozens more since. While most of the horses have been adopted, a team of eight miniature horses offers equine therapy.

Cardet developed the idea for A Place for Peanut alongside her fiance, Bob Allen, a Houston sportscaster who died from complications of cancer in 2016.

She said the couple wanted to combine her lifelong passion for horses with his charitable efforts serving children with special needs through organizations such as the Special Olympics and Sunshine Kids.

“He was all about the kids and giving back, and we wanted to do something together,” she said. “We thought, ‘Why don’t we pull these little horses from the kill pens to give them a second chance at life, rehab them and use them as therapy horses for those children?’”

When she is not working her full-time job in residential real estate or maintaining the stables where A Place for Peanut’s horses are housed, Cardet said she also does advocacy work to prevent more horses from going to kill pens.

Volunteers help maintain the property, groom horses and plan events, Cardet said. They also provide financial support by sponsoring a miniature horse for $50 a month or a full-size horse for $100 a month.

“Say you live in the city and don’t have a place to keep [a horse],” she said. “You can sponsor one and come out and see him by appointment ... and that money goes to take care of that horse.”


www.facebook.com/aplaceforpeanut
Hours: by appointment only

West Road widening expected to wrap up in August

The widening project between Fry and Greenhouse roads is estimated to cost $1.87 million.

Throughout the pandemic, Tuscany has adapted by signing up to platforms such as Uber Eats and DoorDash, creating a patio for outdoor seating, and bringing in live music on Fridays and Saturdays.

Several Cy-Fair road widening, extension and improvement projects are currently underway. Here's a preview of some projects planned for the future.

All fajitas are grilled to order and served with a side of rice and beans.