Grant Road widening project to be completed in January 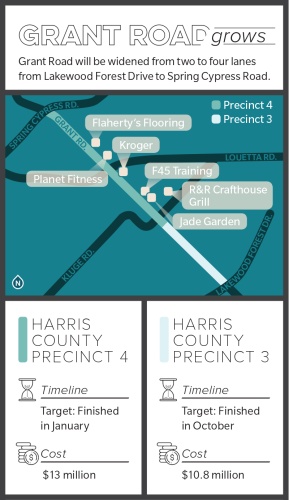 A Grant Road construction project in Harris County that has been a headache for local business owners is expected to be finished by January, county officials said.

The project—which is being funded by precincts 3 and 4—entails widening Grant Road between Lakewood Forest Drive and Spring Cypress Road in Cypress. Daily traffic counts on Grant Road near Kluge Road have increased from 5,500 in 2011 to 13,609 in 2016, according to urban saturation maps from the Texas Department of Transportation, which track traffic counts every five years in the Greater Houston area.

Precinct 3 will widen the road from two to four lanes from Lakewood Forest Drive to Old Kluge Road, a project projected to finish by October. Precinct 4 is working to finish its portion—from Old Kluge to Spring Cypress roads—by Jan. 21.

Several business owners said they are being negatively affected by the construction, which has reduced a portion of the road to one lane in each direction, and in some cases has made it difficult for customers to enter parking lots. Businesses at Lakewood Towne Square—located at the intersection of Grant and Malcomson roads—are among those affected.

Samantha Hall, owner of F45 Training in Lakewood Towne Square, said she has heard customers complain about the construction making her business harder to access.

“We had some lunch customers make comments that until construction is done, they won’t be back because they only had 45 minutes for lunch, and it took them longer to get back and forth from work,” he said. “On the other hand ... some people were looking for detours around it and that is how they found us for the first time.”

Pamela Rocchi, director of capital improvement projects for Precinct 4, said the detours and entrances to the businesses have been approved by the county. The design engineer drives the project to determine if traffic control mechanisms are working effectively, and modifications are made immediately when they are needed, she said.

“The traffic control components of the project—barrels, on-site detours and access—are checked by the contractor and Harris County’s inspector,” Rocchi said. “It is Harris County’s goal to provide a safe environment for both the construction crews and traveling public during construction.”

The contract between Harris County and the construction crew ends in January 2019, which is the anticipated completion date of the project, Rocchi said.