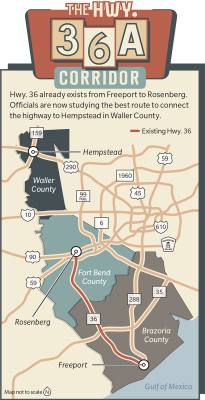 The Texas Department of Transportation has begun a $2 million study on the proposed Hwy. 36A project that will address environmental impact and feasibility.

The study was commissioned by the Houston-Galveston Area Council in November with the goal of analyzing the need for the project, potential costs and alternative routes, said Patrick Gant, a schematic design supervisor with TxDOT.

“Overall, this first phase of the project is anticipated to last two years,” Gant said.

The proposed corridor would pick up where Hwy. 36 meets I-69 in Rosenberg and connect it through to Hwy. 290 in Waller County. In addition to providing another route for residents of these areas, the new highway is intended to serve as an alternative route for truck traffic to alleviate traffic going through Houston from the port.

TxDOT will work with a variety of local entities to make sure the route is stable enough for hurricane evacuation and safe for the environment, Public Information Officer Danny Perez said. Later on in the process, the study will examine environmental effects, including potential effects on drainage systems.

Perez said the first phase of the study will include gathering input from governmental agencies, cities, counties, major landowners, the Katy Prairie Conservancy and the public.

The public meetings—the dates of which are still to be determined—will give residents a chance to comment on TxDOT’s draft purpose, Perez said. From there, TxDOT would develop alternative alignments.

Part of the study will involve determining how to offset any increased flooding the project could generate. Perez said any measures taken to reduce flooding will be further explored after more research is conducted.

No timeframe has been set for when construction could begin. A timeline released by TxDOT indicates a final environmental statement will be prepared around 2021 and a record of decision made in 2022.

Shane Pirtle, a member of the Highway 36A Coalition board of directors, said the project is expected to spur development in the area. New and old businesses are expected to benefit from improved mobility, he said.

“Economic development is a huge opportunity out there for existing and new businesses,” he said. “It’s also an alternate traffic flow to bring some traffic away from Houston, so there are lots of opportunities.”
SHARE THIS STORY

The start of the school year is just around the corner.

About $5.5 million is designated for city fire and police department compensation in the proposed 2021-22 budget.

Former Cy-Fair ISD athletes will be going for the gold represeting the United States, Lebanon and Nigeria.