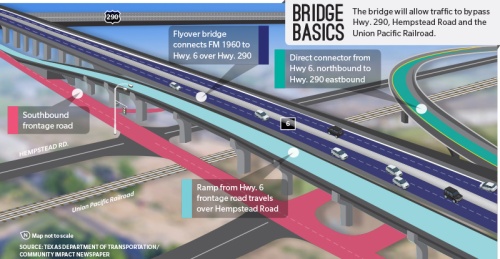 Work has begun on a project designed to address congestion levels at one of the most highly trafficked intersections in Cy-Fair.

The Texas Department of Transportation is working on a four-lane flyover bridge that will connect Hwy. 6 to
FM 1960 over Hwy. 290, which officials said will streamline traffic and reduce traffic at the intersection.

An estimated 220,000 vehicles travel through the intersection every day, according to TxDOT data. Meanwhile, population along the Hwy. 290 corridor is expected to grow to 1.1 million by 2040—a 60 percent increase from 2010—according to the Houston-Galveston Area Council.

TxDOT officials said the key to easing congestion involves separating drivers who want to access
Hwy. 290 from those who want to continue straight on Hwy. 6. The latter, once the bridge is complete, will be able to bypass traffic lights at Hwy. 290.

TxDOT crews have nearly wrapped up the utility relocations along Hwy. 6 and FM 1960 and have begun clearing land to prepare for the construction of new frontage roads. Deidrea George, a public information officer with TxDOT, said crews have begun installing storm sewer systems along Hwy. 6 northbound near Hempstead Road, which will be followed by work on the Hwy. 6 frontage road.

The frontage roads are being targeted for completion by the end of 2018, and work on the bridge is set to begin in 2019, she said.

“The Hwy. 6 flyover will be great once it’s completed,” said Leslie Martone, president of the Cy-Fair Houston Chamber of Commerce. “I look forward to seeing the retail, restaurant and hotel growth in that area.”

Jeff Collins, executive vice president with LJA Engineering who also serves as the co-chair of Transportation Advocacy Group in Houston, said he thinks the bridge could transform the intersection.

“You’ll see the operational levels greatly benefit everyone at peak and nonpeak times,” he said. “It will be easier to get people in and out of [businesses] on Hwy. 6, and it will be easier for people to get to work in the mornings and go home in the evenings.”

Although some lane closures will be necessary during construction, Samuels said TxDOT has worked out a plan to avoid have to shut entire road down at once.

"TxDOT and the contractor have developed a Traffic Control Plan, which will allow motorists to travel through the area during construction," she said. "The bridge will be constructed in roughly the same area where [Hwy. 6] and FM 1960 are located today, so the frontage roads must be built first to allow traffic to travel through the area while the contractor builds the bridge."

Although substantial construction on the bridge has yet to begin, developers are already targeting the area with hopes that mobility improvements lead to increased business.

However, as construction on the bridge kicks off, some business owners said they are concerned about how their sales will be affected over the next year.

Harry Chambers, who runs the Harris County Smokehouse at the southwest corner of the intersection, said construction on the highway already forced him to relocate his restaurant once. He moved it from the northwest corner to its current location in 2015 after road work closed off an entrance and ate into his available parking.

Since work began to widen Hwy. 290 main lanes near Hwy. 6 in 2017, Chambers said he estimates he is losing $2,000 per day because of the construction.

“The second they tore up the right-hand side of that  bridge, it dropped our sales immediately not having the U-turn,” he said. “Traffic is backing up down the feeder, and it takes a long time to go left. People don’t want to go through that when they go out for lunch, so they just avoid the corner altogether.”

Chambers said he would like to see progress at the intersection move faster. However, he said he thinks the project will have a positive effect on business once it is completed.

“Real estate has gotten better, so they build those intersections now so you can have access [to businesses],” he said. “We’re going to be better off when this thing gets done. We’re going to have the largest [intersection] in northwest Harris County.”

Caldwell’s mixed-use project will go up on a 15.5-acre parcel at the northeast corner of the intersection. Caldwell Executive Vice President Peter Barnhart said the development will include a mix of medical and traditional office space, restaurants and national retail outlets.

Barnhart said a StayBridge Suites hotel is expected to break ground any day, and leasing is underway on a 20,000-square-foot retail center facing FM 1960.

“One of the reasons we’re bullish on this intersection is that is has two of the most highly trafficked road in northwest Harris County,” he said. “Once construction is done, business is only going to increase for all the business owners in that area.”

As work on the bridge kicks into high gear in 2018, TxDOT officials said work on Hwy. 290 main lanes will be coming to a close. The department has been working on the $4.7 billion project to widen a 38-mile stretch of the highway from Loop 610 to the Harris County line since 2011.

The first projects to be completed will be west of the Grand Parkway, and main lanes could open to drivers by April, officials said. The projects from Loop 610 to Beltway 8 would be finished later in the year, and the projects that will likely take the longest to complete are those around Huffmeister Road and FM 1960.

Collins said the highway’s completion will add more certainty to how long it will take to get from place to place, a benefit for businesses and commuters.

“With the way it is now, you never know when you’re going to run into lane closures or construction,” he said. “We’ve been through the congestion and we’re ready to see the benefits of a completed highway.”