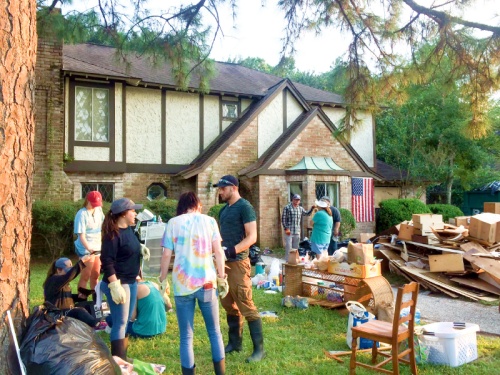 When Hurricane Harvey devastated hundreds of Cy-Fair families, local nonprofit Cy-Hope’s board of directors developed an idea for how to help residents recover and better prepare for future disasters.

Steve Saunders, director of the Cy-Hope Disaster Recovery Network, which was created after Harvey, estimates it will take six to eight years for Cy-Fair to see a full recovery. During that time, he said, the network will continue to support local families who are unable to recover on their own.

“Two years of consecutive 100-year floods really brought this idea to fruition,” he said. “The idea was brought to a meeting of 60 local pastors, business owners and community leaders that agreed to support the effort of starting the network.”

Since Hurricane Harvey, the network has received more than $200,000 in donations—mostly from local churches—which has been used to rebuild homes and help provide resources for long-term recovery. Network members have helped repair the homes of more than 100 families so far, Saunders said.

Many of the churches that became members coordinate repair teams composed of their own volunteers, but members also coordinate with groups traveling to the area to help, Saunders said.

Volunteer advocates are matched with families to provide emotional and spiritual care. The network also has some paid staff members who are trained in disaster recovery case management, Saunders said. These individuals oversee volunteer case managers as they develop recovery plans for families.

Saunders said he looks forward to seeing the disaster recovery network continue to raise funds to support local families in the new year.

By the end of 2017, officials said they would like to have secured funding to repair another 40 homes in the first quarter of 2018. The public can continue to support these efforts by donating time and money to the network, Saunders said.

“The community has been very generous in helping the network begin operations,” he said. “[In 2018], the Cy-Hope Disaster Recovery Network hopes to help hundreds of homeowners in some way with recovery efforts from Hwy. 249 in the north to Bear Creek in the south of the Cy-Fair region.”
SHARE THIS STORY