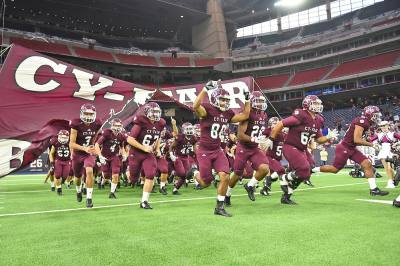 The Cy-Fair High School football enters the field during its Class 6A Division II state semifinal playoff against Austin Westlake on Dec. 16 at NRG Stadium. The Bobcats beat Westlake 14-6 to advance to its first-ever state championship game.

The Cy-Fair High School Bobcats have advanced to a state championship game for the first time in the school's history.

After defeating the Austin Westlake Chaparrals in the semi-finals, the Bobcats will face the Waco Midway Panthers in the state championship game Saturday, Dec. 23, at The AT&T Stadium in Arlington, Texas.

"To be in a place as long as we have and to finally get to the goal that everybody sets in August is really special," Head Coach Ed Pustejovsky said. "It would be special for anybody, but as long as we’ve been together, this is different. We’ve been through the playoff rounds but just have never been able to bust through to that last one."

"It seems like the first playoff game was yesterday, so we’ll enjoy but we’ll be ready to go back to work in the morning," he said.
SHARE THIS STORY