With insufficient inventory in the single-family housing market and an influx of buyers, Cy-Fair’s average home price increased nearly $120,000 from the start of the COVID-19 pandemic in March 2020 to this April, according to data from the Texas Real Estate Research Center.

Tara Hall, a local Realtor with Keller Williams Professionals Houston, said the seller’s market—defined by low supply meeting high demand—is expected to continue. While activity has slowed some since earlier in the pandemic due to rising interest rates, demand remains high locally, she said.

“There’s a lot of people that seem to think it’s going to be quote-unquote shifting, but it will not be shifting anytime soon,” Hall said. “What we’re seeing is an evolution of the market because the interest rates have gone up a couple of points since the beginning of the year, so instead of seeing, let’s say, 40 offers on a house, you may see 20. Or you may see some houses sitting a little bit longer—like seven days instead of three.”

Local income trends lag behind the rise in home prices, causing affordability concerns, real estate experts said. Some 41% of Harris County households are earning the minimum qualifying income to afford a median-priced home, according to the Houston Association of Realtors’ Housing Affordability Index. That number drops to 30% in Cypress and 33% in Jersey Village. 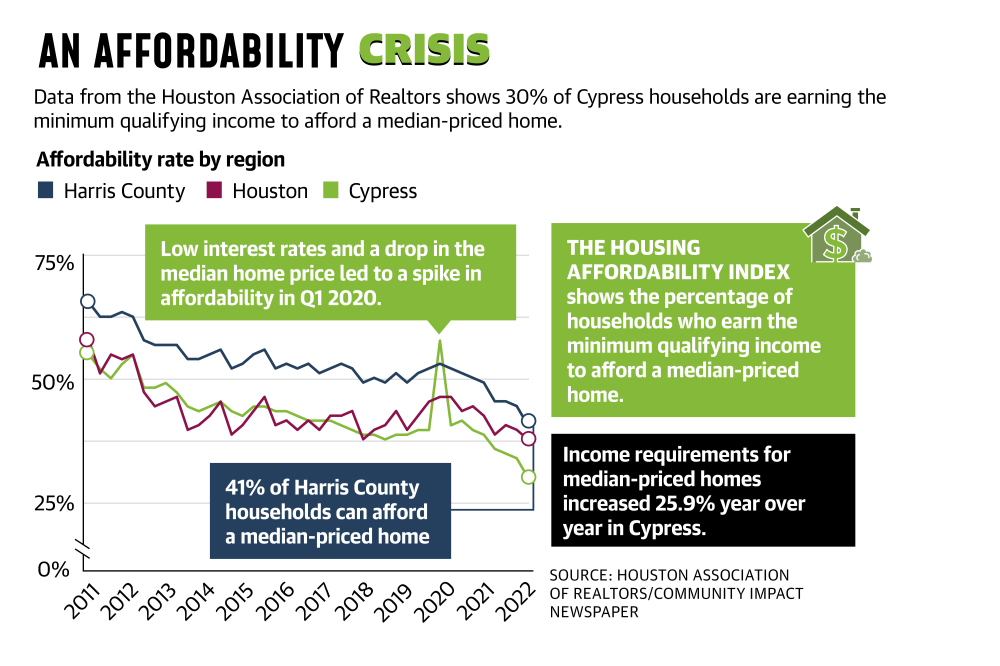 Lawrence Dean, senior vice president of advisory for Texas at housing market research firm Zonda, said historically Houston has been known as one of the more affordable metropolitan areas in the U.S. because the market can typically supply more housing as needed. In Houston, there are minimal regulatory barriers and natural barriers that inhibit growth in other parts of the country, he said.

As low inventory drove elevated prices in the resale housing market during the pandemic, homebuilders ramped up production, experts said.

Nearly 21,000 homes are under construction in the Houston region—the most Zonda has ever observed in its quarterly counts, Dean said. According to a report demographers at Population and Survey Analysts released in May, about 11,750 single-family homes and 8,800 multifamily units are planned for the Cy-Fair region in the next five years.

But new construction homes have also become more expensive. In ZIP code 77433, where most of Cy-Fair’s new home construction is taking place, the average home sales price rose from $374,800 in June 2020 to May 2021 to $445,559 in June 2021 to May 2022, according to data provided by The Baker Foreman Team at Better Homes and Gardens Real Estate Gary Greene in Cypress.

“The cost of building materials, the cost of labor and the cost of land—it takes all of those things in order to build a new home—the cost on all those items shot up exponentially during the pandemic,” Dean said. “Some of it was the supply chain; some of it was labor-related availability [or] a mix of both.”

As of April, the Copperfield submarket had 0.4 months of inventory available—down from 1.8 months in April 2019, according to the TRERC. This metric indicates the estimated amount of time it would take before the supply of homes is depleted. Similarly, northern Cypress had about 0.5 months available as of April.

In the southwest portion of Cypress, inventory was higher at 1.3 months this April compared to 3.1 months two years earlier, the center reported.

Hall said the market will become more balanced when homes are on the market for three to six months. A buyer’s market takes place when homes are listed for about six months or longer. According to the TRERC, this has not happened in Cy-Fair since the organization began tracking months of inventory at the submarket level in 2015.

“It’s going to take a hot second to even build up enough inventory to satisfy all the buyers that are [looking],” Hall said. “When you do have 20 offers for every one house, you’ve got 19 buyers that are still looking for houses.”

Following the Great Recession in 2007-09, housing prices only slightly increased from year to year for about a decade. However, Hall said houses gain about 4% value per year, so the prices buyers see today are more in line with what they would have been if not for the Great Recession.

“While we may see that houses are not going to keep appreciating in the volume that they are right now, 10% and 20% year over year, it’s going to slow back down to 4%, but it’s not going to severely dip,” Hall said. “It’s not going to go back to normal.”

Master-planned communities Bridgeland, Marvida and Avalon at Cypress are expected to add the most single-family homes to Cypress in the next decade at 3,478, 2,588 and 1,684, respectively, according to PASA.

The Houston metro’s median single-family home value rose 16% from May 2021 to May 2022 and is now the highest on record at $351,000 despite fewer sales year over year, according to HAR. Rising interest rates are expected to be a large cause of declining property sales.

Dean said those who have purchased homes in the past two years were able to afford higher prices because interest rates dropped to historic lows. Monthly housing costs were about the same as they would have been historically for a less expensive home at a higher interest rate, he said.

However, since the start of the year, interest rates have been trending up again and are now even higher than they were before the pandemic. According to Freddie Mac, the U.S. average 30-year fixed-rate mortgage was 3.11% at the end of 2021 and rose to 5.78% by mid-June. 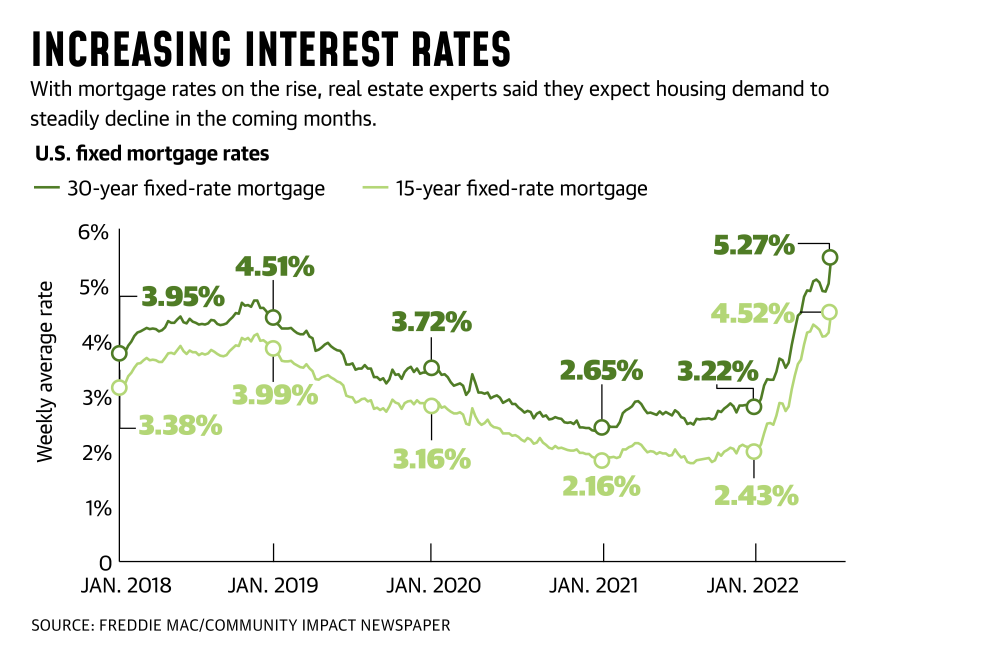 Dean said this trend could contribute to a pivot to a more balanced market in the coming months.

“Even just being a balanced market would be extremely more favorable for buyers than anything buyers have experienced in two years at this rate,” he said. “So I wouldn’t be surprised if that kind of evolves over the balance of this year, just as increased interest rates do kind of what the federal government intended for them to do, which is slow down a frothy, hot economy and drop the hot housing market and related pricing.”

As housing prices and interest rates continue to rise, experts said fewer people could be able to afford homes. Hall said many first-time homebuyers are not able to compete with prices on the market at this time.

“We do have inventory that is below that, so don’t just assume that you’re one of those 53% who can’t qualify based on your income,” HAR Chair Jennifer Wauhob said.

Local prices seem more affordable, however, to clients moving from states where housing is more expensive, such as California, New York and Michigan, Hall said.

“Affordability is definitely becoming a problem, but then we’ve got this influx of people coming in from out of town, ... our prices look great to them,” she said.

While homes in the Houston region may seem out of reach for many of its residents, Dean agreed Houston maintains its status as affordable when compared to other major metros across the state and the U.S.

“It is less affordable here than it used to be, but still relative to other housing markets, it is affordable. This market just used to be an amazingly affordable market, and it’s not quite that anymore,” Dean said.

Hunter Marrow and George Wiebe contributed to this report.