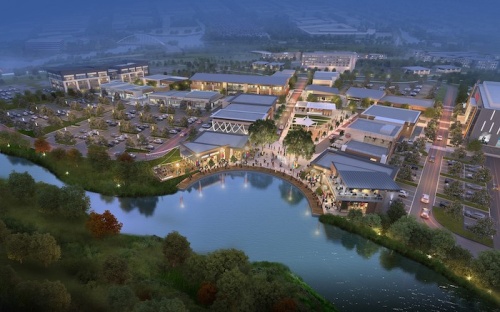 Plans are coming together for a 900-acre mixed-use “urban hub” that developers with The Howard Hughes Corp. will build at the center of the Bridgeland master-planned community in Cypress.

The main component of Phase 1 will be 350,000 square feet of office space. The inclusion of office space is crucial to the long-term vision for Bridgeland, which is expected to have 20,000 homes at build-out, according to officials with Howard Hughes. Jim Carman, senior vice president of commercial development, likened long-term plans to The Woodlands, the 28,000-acre master-planned community also developed by Howard Hughes.

“The goal for Bridgeland is to have 1 ½ jobs per household in our community,” Carman said. “Bridgeland will be an all-encompassing community where residents can enjoy the convenience of living and working in their community.”

The development will be situated east of the Grand Parkway, largely between Bridgeland Creek Parkway and Bridgeland Lake Parkway. Marketing materials from Howard Hughes suggest construction could begin in 2020, but Carman said the plan is to be patient and coordinate the start of construction with when the market demand is there.

The project will also include waterfront views, parks and a central lawn space for community events, Carman said. He drew a comparison to The Woodlands Town Center.

An effort to market Bridgeland Central to retailers, entertainment venues and office tenants kicked off earlier this year, Carman said.

“We have received interest, particularly as our home sales in Bridgeland have continued to be strong,” he said.

Leslie Martone, president of the Cy-Fair Houston Chamber of Commerce, hailed the project’s efforts to bring more jobs to the Cy-Fair area. She said she thinks the ability for people to work at jobs close to home is something Cy-Fair residents would embrace.

“I believe that the less people have to travel to work, the better,” Martone said. “Any expansion in that growing part of Cy-Fair is only going to be a positive in the near future.”