Reports show flu symptoms on the rise in the Houston area 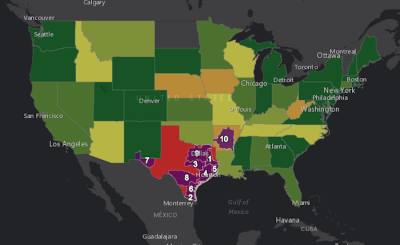 Many of the top 10 areas for flu activity can be found in Texas.

Flu season is ramping up in Texas.

The number of patient visits due to "influenza-like illnesses" and the percent of people testing positive for influenza increased throughout December, according to the most recent report from the Texas Department of Health and Human Services released Dec. 29.

The flu situation in Texas was upgraded to "widespread" status around mid-December. That means influenza-like illness outbreaks have been seen in at least half of the state's study regions, and influenza itself has been confirmed in the state by lab testing.

About 10 percent of hospital emergency room visits in Harris County were due to influenza-like symptoms, according to the Houston Health Department's influenza surveillance report for the week ending Dec. 16. This figure was around 1.6 percent during the same time in 2016, and 1.3 percent in 2015.

Meanwhile, the pharmaceutical chain store Walgreens has identified Houston as the No. 4 market area for flu activity in its weekly flu index for the week ending Dec. 30. Texas was the top state for flu activity that week, and nine of the top 10 market areas were in Texas.

David Tran, who works as the pharmacy manager at the Walgreens branch at Mason Road and Cypresswood Drive in Cypress, said the company compiles the data by tracking the number of patients who fill antiviral subscriptions across 8,000 Walgreens stores in the U.S.

Flu season can start as early as October and last all the way through February or early March, Tran said.

"It’s the change in the weather," he said. "The cold weather is the ideal medium for the virus to thrive. When it’s cold, it's easily transmittable to others if they didn’t get vaccinated or don't practice good hygiene."

Tran said he cannot say for sure why Texas is seeing such widespread activity, but said getting a flu vaccine is still the most effective way for people to protect themselves against the most common strains.

"The issue is that flu season every year is unpredictable," Tran said. "The CDC and [World Health Organization] try their best to predict what is going to be prevalent in the population."

Flu vaccines are devised using pieces of the dead virus, which are injected into the body to stimulate the production of antibodies to help fight the virus if an individual does get infected, Tran said. The biggest misconception about the flu vaccine is that it can cause someone who receives it to actually come down with the flu, he said.

"Let’s say for example you start to feel like you're coming down with something. You think in your mind that you should get the flu shot, but if you already came in contact with someone who spread the flu to you, the virus is already manifesting in you," Tran said. "You get the flu shot, but you still end up getting sick. This unfortunately makes you think the flu shot gave you the virus."

Tran emphasized that it is still not too late for people to get vaccinated. Flu shots can be obtained at Harris County Public Health locations, through private physicians and at area drugstore and grocery clinics such as Walgreens. Most insurance plans cover the flu shot at Walgreens, Tran said, but he said people can receive the shot for $31.99 out-of-pocket as well.

"Even if you do [get infected], it will not be as potent as if you didn’t get the shot," he said.

Correction: An earlier version of this story incorrectly stated the price that flu shots can be obtained at Walgreens out-of-pocket. The story has been updated with the correct price.
SHARE THIS STORY