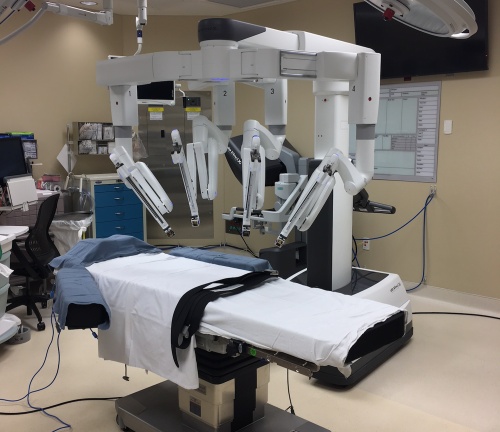 Surgeons at Memorial Hermann Cypress hospital performed the first surgery with the new da Vinci Xi robotic surgical system on Nov. 16. The introduction of the technology is a part of an ongoing effort to enhance medical care at the Cypress hospital—which opened in March—hospital CEO Heath Rushing said.

Robotic surgery improves the surgical process in two key ways, Rushing said: it allows physicians to have better access to the body cavity and it provides greater visibility. The da Vinci Xi—which was debuted by the medical technology company Intuitive Surgical in 2014—is the most recent technology available on the market, he said.

“You are really able to reduce the patient’s length of stay, reduce the amount of pain associated with certain procedures as well as provide a faster recovery process,” Rushing said.

The Xi model improves upon previous robotic systems by giving surgeons even better access to certain areas of the body around the torso and gut area, according to Brad Snyder, a general surgeon affiliated with the Cypress Hospital and with the McGovern Medical School at UTHealth.

"This new robot gives surgeons better access to certain areas of the body that would not have been ideal for robotic surgery previously,” he said.

The system can be used in wide variety of procedures, including colon and rectal surgery, gynecological surgery, urologic surgery, bariatric surgery and general surgery. It was used for around 10 procedures in its first two weeks of use, Rushing said.

“This technology enhances the offerings for multiple lines of service, which is one of the things we look for as we develop our services,” he said. “We anticipate that the robot will be used very often.”