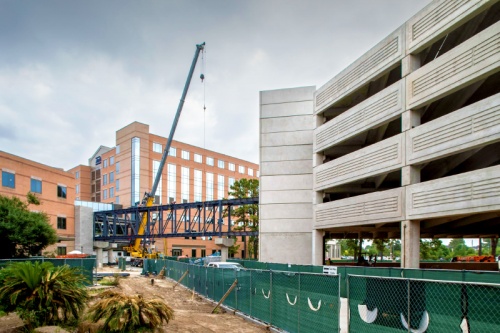 Houston Methodist Willowbrook Hospital on Hwy. 249 is one of several Cy-Fair area hospitals with expansions underway.

As population growth generates greater demand for health care services in the Cy-Fair area, community hospitals are finding ways to provide higher levels of care to residents closer to their homes.

From trauma care to cancer treatments to childbirth services, Cy-Fair hospitals are looking to bring more elements found in the Texas Medical Center to Cypress.

Memorial Hermann Health Systems—which opened a Cypress hospital in 2017—has embarked on a $25 million expansion project, while the Cypress Fairbanks Medical Center Hospital is upgrading from a Level III to a Level II trauma center. Also, a number of expansions are also underway at Houston Methodist Willowbrook Hospital, where a six-year effort to develop a comprehensive cancer program has yielded levels of service that physicians say is comparable to those found in the Texas Medical Center.

Hospital expansion to begin in July

To meet the health care needs of the Cypress population, Memorial Hermann announced in April it would launch a $25 million expansion effort on its 32-acre campus in Cypress, which should be completed by summer 2019.

Memorial Hermann officials said they decided to build the hospital—which opened in 2017 on Hwy. 290 between Mason and Mueschke roads—because of the lack of comprehensive health care services in the area, particularly in the 77433, 77429 and 77377 ZIP codes.

The population in those three ZIP codes grew by a total of 34,591 people between 2012 and 2016, according to the U.S. Census Bureau. The nearest hospital at the time was the North Cypress Medical Center, which is about a 20- to 30-minute drive from several of the fastest-growing communities in Cypress, including Bridgeland and Miramesa.

Rushing said the improvements are meant to serve more patients as population growth accelerates in the area.

“We have exceeded expectations in terms of volume across all of our services,” Rushing said. “The expansion will help to create a release valve for us to be able to continue to grow and support the community when they need us.”

Part of the improvements also include additional isolettes and equipment for the neonatal ICU, which are used for ill or prematurely born babies, Rushing said. The hospital is pursuing designations to become a Level II NICU and Level III trauma center.

“Those are three programs that we did not have when we first opened,” Rushing said. “We have the latest in technology with the surgical robot, and we have surgeons every day expressing more and more interest in helping support and grow that program.”

More physicians will need to be recruited with the expansion, he said. The hospital has 350 employees, a number which continues to grow.

Improvements to trauma care have become a priority for officials at the Cy-Fair Medical Center Hospital, who said rapid population growth has intensified the need for services that are often the difference between life and death.

The hospital has been providing Level II trauma services since 2017, CEO Naman Mahajan said. He said the main difference between the Cy-Fair Hospital and Level I trauma centers downtown, aside from academic components, are the Cy-Fair hospital does not cover extensive burns and pediatric trauma, he said.

“We, in essence, provide the same level of clinical care as Ben Taub and Memorial Hermann downtown,” he said.

Mahajan said he expects the hospital to be recognized by the state as a Level II center by next April, after a surveying period by the American College of Surgeons is completed. To upgrade to Level II, a hospital needs to be able to ensure a trauma surgeon is available within 15 minutes of every call.

Previously, Cy-Fair patients in need of Level II services had to be transported downtown by emergency responders, Mahajan said. May was the first month EMS officials with the Cy-Fair Volunteer Fire Department said they did not have to transport any patients downtown. The reduced travel time has the direct result of saving lives, Mahajan said.

“This could truly make the difference between life and death for a patient,” he said.

At the Willowbrook Hospital’s Breast Care Center, Dr. Anna Belcheva, chair of the hospital’s cancer committee, said she is confident they have achieved that goal.

“Medicine is really pushing more towards that specialization,” said Sewell, who joined the team in 2016. “You’re not the jack-of-all-trades; you’re just the master of one.”

The entire team meets on a weekly basis as a part of a multidisciplinary conference referred to as a tumor board. They discuss each patient that went through surgery or a medical oncology clinic that week.

By getting input from all parties, the board ensures patients are getting the most up-to-date treatment, Thalheimer said.

“It’s really gives the patient better care because it’s not just left up to one person to understand every single small caveat of the treatment process,” she said.

The team has also prioritized research and staying up to date on the newest technologies. Earlier this year, the hospital began using radioactive seed technology to target cancerous tissue, which improves speed and accuracy, Sewell said.

“We are the only place in the entire Houston Methodist network to do that,” she said.

The hospital has also been conducting clinical trials for the past three years. Results from a clinical trial evaluating different treatment methods—called the TEAL study—were presented at the annual American Society of Clinical Oncology meeting in early June.

“This was a practice-changing clinical trial,” Belcheva said. “This is how progress and new therapies come to exist.”

Aside from investing in cancer programs, officials have several expansion projects underway. A project to expand the outpatient surgery center will wrap up in mid-2019 and will increase surgical case capacity by more than 50 percent. The hospital’s childbirth center is also being remodeled and expanded to include a special unit for expectant mothers in need of medical observation.