The Harris County ESD 9 commissioners met in a regular meeting on Sept. 22 to finalize the 2023 tax rate and review other business. (Courtesy Daniel Arizpe)

The Harris County Emergency Services District No. 9 board of commissioners unanimously approved at the Sept. 22 meeting the no-new revenue tax rate of $0.049984 per $100 valuation to support an $82.4 million budget for fiscal year 2023. This budget included 10% salary increases for staff and was approved during a Sept. 15 workshop.

The taxing district supports emergency services offered by the Cy-Fair Fire Department, and officials said they anticipate receiving about $85 million in revenue to support operations in the next fiscal year. Also included in plans for FY 2023 was $51 million in capital expenses, including land purchases for future stations in Towne Lake, Dunham Pointe and Bridgeland.

The no-new-revenue tax rate of $0.049984 per $100 valuation was preliminarily accepted by the three newest commissioners, Naressa MacKinnon, Robert Paiva and Kevin Stertzel, with Bevin Gordon and David Langenberg in opposition at an Aug. 25 meeting. The board ultimately supported the no-new-revenue tax rate unanimously after hearing comments from members of the department and the public requesting Sept. 22 to keep the taxes at a sustainable rate for the department.

“We also enjoy already, one of the lowest tax rates for ESD in the entire state. Seems to me we’re already getting great bang for our buck and I can tell you, speaking for the past majority of people that I talk to do not want to see our budget cut,” State Rep. Jon Rosenthal, D-Houston, said during the Sept. 22 meeting. “They want to see this department continue to plan for a developing future where our blossoming population growth here is well cared for.” 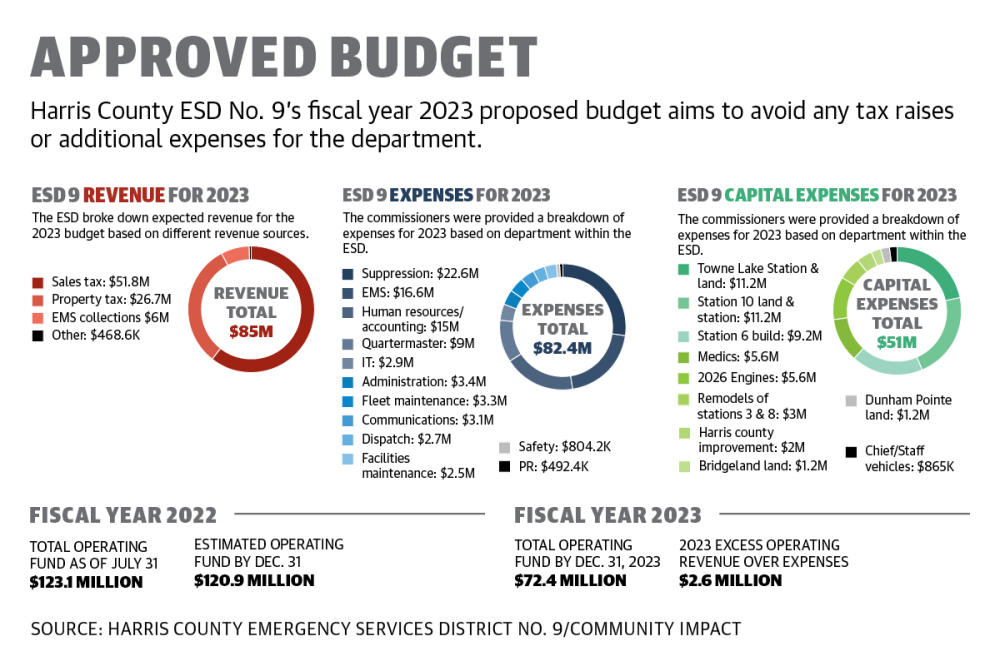 While staff raises were not initially included in preliminary budget plans, Fire Chief Amy Ramon advocated for funding to provide raises for staff members at the Sept. 15 workshop. Ramon said she provided justification for the raises by tying it to annual U.S. Social Security Administration inflation reports with the 2023 cost of living projected to increase by about 10%.

Concerns around burnout and the retention of employees have been heightened since the start of the COVID-19 pandemic, officials said. The department reported 191 staff members for fire suppression, 135 volunteers and 138 EMS personnel in August.

“The reason that we’re here is the community, but the only way that the community gets taken care of is if the people who work here get taken care of,” Ramon said. “Because if they feel like they’re second class or if they’re not getting taken care of, then that attitude is going to be taken out on the citizens, and I don’t want that.”