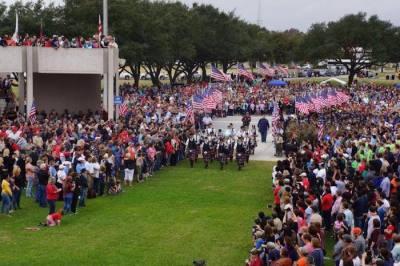 Guests participate in a Wreaths Across America Ceremony in Houston that included a rendition of Amazing Grace on bagpipes.

Throughout the year, families visit the graves of veteran family members to place flowers and pay their respects. Wreaths Across America’s Houston chapter has brought a Christmas tradition that stands with those families and remembers veterans alongside them every year.

Wreaths Across America is a nonprofit dedicated to remembering deceased veterans and educating children about what veterans fight for. Every year around Christmas, a wreath laying ceremony allows the public to witness as volunteers and family members of veterans lay wreaths on tens of thousands of veteran graves.

The Houston chapter has been performing its wreath laying ceremony at the Houston National Cemetery on Veterans Memorial Drive for 10 years following its founding by father and son Scott and Alex deMasi.

Peggy Slay, director of the Houston chapter, said Alex deMasi originally wanted to start the Houston branch after seeing the original organization on the news and finding out there was no local chapter.

“Alex, a six-year-old, and his dad were watching the Arlington branch on the news and got all excited, and went online [and] bought wreaths for all their family members,” she said.

“We don’t know where they all come from,” she said. “It’s made up of Patriot Guard Riders and there are some from San Jacinto. There are anywhere from 300 to 400 motorcycles that escort the trucks into the cemetery.”

Jackie Reyes, administrative officer for the Houston National Cemetery, said the organization usually gets all 76,000 grave sites covered with wreaths that donors can sponsor for $15.

“Everyday families come out here to honor their families with flowers,” she said. “The wreathing ceremony lets them know they are not alone.”

Slay said the event is educational for children as well. Part of the event involves teaching them about the sacrifices fallen veterans have made for their country.

“It was very surprising and heartwarming in the beginning,” she said. “There are people whose family members have served alongside the folks laid to rest in the cemetery...This is a way to pay respect to not only the fallen heroes in the cemetery but also their families, their brothers and sisters in arms, and thank them for their service.”
SHARE THIS STORY