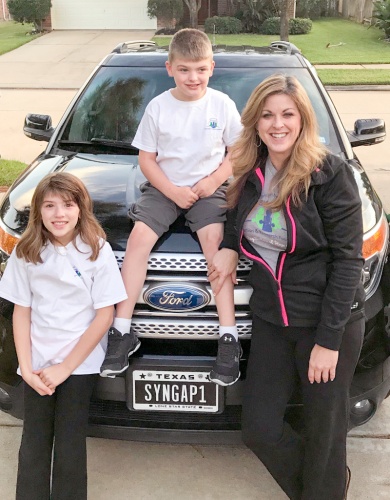 Monica Weldon first noticed something was wrong with her son Beckett when he was 4 months old and his development was far behind his twin sister’s. Beckett had seen 19 clinicians and three neurologists by the time he was the first Texas Children’s Hospital patient diagnosed with a rare neurological disorder at age 4.

Beckett has a mutation in the SYNGAP1 gene, a critical protein for brain development. The mutation—discovered in humans in 2009—results in mild to severe intellectual disability and has been linked to autism and epilepsy.

At the time of Beckett’s diagnosis, Weldon said there was only one paper published on the disorder. Through blogging and creating a Facebook page, she found an outlet to share her experiences and connect with other families going through the same challenges.

“When Beckett was diagnosed, no one could tell me the prognosis, the lifespan—really anything,” she said.

After a 23-year career as a teacher, Weldon left her job to start Bridge the Gap as a nonprofit to raise awareness and funding for research. When it launched in 2014, the group worked with 24 patients from around the world. Today, there are more than 250.

“As time went on, we realized how big this gene actually was,” she said. “Now, it looks like it’s going to be overlapping into other disorders.”

Seven international labs are researching the SYNGAP1 mutation with help from Weldon’s team, which helps connect researchers to patients in addition to securing funding. Scientists have discovered it is one of the genes responsible for brain plasticity, and research could ultimately help patients of Parkinson’s disease, Huntington’s disease, Alzheimer’s disease and dementia, she said.

Part of her job description as president and CEO of Bridge the Gap includes traveling to advocate to state and federal entities on behalf of rare disease patients. Over the last six months, Weldon said she has helped secure $7.5 million in research grants.

In mid-November, several Bridge the Gap families met at Johns Hopkins Hospital in Baltimore. The families got the chance to share their experiences with physicians who were looking to collect data to support their research.

Weldon said despite the challenges that come with her son’s condition, his quality of life has greatly improved since she launched Bridge the Gap.

“I used to not even be able to bring [Beckett] into a public place,” Weldon said. “We couldn’t sit down at a restaurant as a family; we couldn’t go to church.”

Now 9 years old, Beckett takes about seven different medications to support his immune system, control his seizures and improve sensory issues. Weldon said when physicians first caught his seizures, he had about 30 words in his vocabulary, and today he has more than 500.

“He’s always going to depend on someone,” she said. “He’s 9 years old, and cognitively he’s about 3 or 4. But he is progressing, and as long as he’s not regressing, we’re doing something right.”