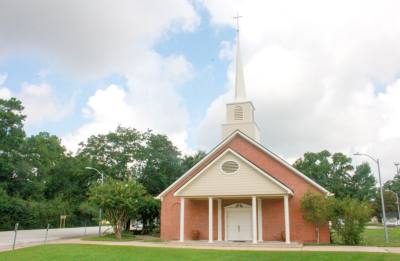 Christ United Church of Cypress's main building has been in the same location for decades, surviving several floods.

Founded nearly a century ago and having weathered two major floods over the past two years, Christ United Church of Cypress continues to hold service with a core community of longtime members and time-tested tradition.

Christ United was founded in 1928 by the first reverend, Ewald Henry Schwengel. According to “History of Christ Church United”—a book of articles written by several members of the church—Schwengel came from Spring to visit Cypress and noticed there were 30 families in the area who had no church to attend. The leader of an unofficial Christian meeting group encouraged Schwengel to unite the community, and the church began to form.

According to writings by Schwengel, the original building was constructed by local farming families.

“When they could spare a day from farm work, the farmers dismantled the old sheds and small buildings and hauled the lumber to church property,” he said in the book.

When the congregation first formed, there were less than 100 members. Jeffrey Willey, who has served as the pastor for Christ United since 2015, said the attendance numbers have not changed much since.

Presently, the congregation still uses the original building. However, the Tax Day flood in 2016 and Hurricane Harvey both caused damage, and the church has undergone some reconstruction. Even with the pews damaged from the flooding in August, service resumed in September in the fellowship section of the building, Willey said.

Willey said the structure of the church, including the handcrafted wood and handmade stained glass, helped it stay standing where it has been for so long. He said the core attitude of the church community has kept spirit alive even after floods and reconstruction.

“We bring up memories of stability, no matter what your background is,” Willey said. “God is here, and it’s gonna be okay.”