Despite challenges, Harris County to speed up flood projects 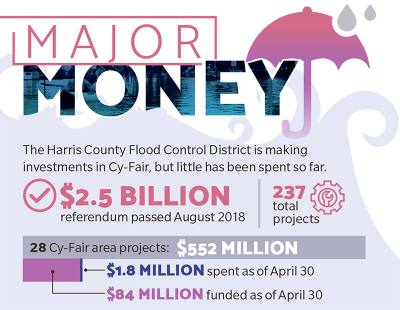 As hurricane season returns to Texas in June, officials in Harris County are responding to increasing pressure from the public to get flood control projects underway faster while also navigating the challenges of trying to execute hundreds of projects at once.

Unlike in years past, the county now has $2.5 billion in local money at its disposal courtesy of a bond referendum approved by voters last August. The money will be used to help execute 237 flood control projects, a plan that was initially spread out over 10 years but officials now said could be condensed into five years.

“I’m not sure if we can have every project complete in five years, but the goal now is to have all projects substantially underway in five years,” said Matt Zeve, the deputy executive director of the Harris County Flood Control District.

Roughly 28 of those projects are in or affect the Cy-Fair area—the northwest part of the county north of FM 529 in the Addicks Reservoir watershed and west of Hwy. 249 in the Cypress Creek watershed, also including parts of the White Oak Bayou watershed outside of Beltway 8.

The local cost of those 28 projects comes to about $552 million, according to HCFCD estimates. As of May 1, about $84 million of that bond money has been funded, and only about $1.8 million has been spent. Some local residents and advocates have been among those pushing for faster progress and more attention on Cy-Fair projects.

However, condensing projects into a five-year plan will not come without complications and slowdowns that flood control officials said are out of their control, such as receiving crucial federal grant money and acquiring land from potentially uncooperative private landowners.

One of the larger challenges flood control projects need to overcome is finding the laborers and engineers needed to execute 237 projects simultaneously.

“I think really in the last three to four years, you’ve seen quite a demand for engineers—civil in particular,” said Jeff Collins, the executive vice president of LJA Engineering, a Houston-based firm that has contracted with Harris County on multiple drainage and flood projects. “Any time the oil and gas industry is doing well, it’s great for our region, but you also pull a lot of people, both engineer and support people, away from other types of engineering.”

Although the flood bond projects will not completely solve flooding in Harris County, they will remove many people from danger of flooding once completed, Precinct 4 Commissioner Jack Cagle said. Cagle was among the elected officials to question whether the bond projects could be completed faster than 10 years.

“Being exposed to hurricane seasons for 10 years is frightening for a lot of our constituents,” Cagle said in an April interview. “So if we can shorten that timeline to where the worst exposure is five years, or at least to have your projects underway in five years, you eliminate all of the competitiveness that comes with ‘choose me, not them’ type issues.”

At a March meeting of the Harris County Commissioners Court, when Cagle first asked about executing all bond projects in five years instead of 10, Zeve said hiring people was among the biggest challenges. He said the district was hiring more people from outside of Texas, who often come to the job with a steeper learning curve.

However, the engineer shortage is not the only obstacle, Zeve said. Obtaining environmental permits generally goes through the Army Corps of Engineers, a process Zeve said involves a lot of work and takes time. Purchasing right of way to build projects could, as a last resort, involve the condemnation of land and potential years-long courtroom battle. Waiting for the federal government to approve funding is another time element that is beyond the HCFCD’s control, Zeve said.

“For some federal funding partners, we’re at the mercy of their schedule when funding gets approved [and] when reimbursements come in,” Zeve said. “Certain federal partners have requirements we typically don’t have, like environmental assessments. Doing stuff like that takes time and money.”

Cagle described the effort to condense projects into a five-year plan as “a great call.”

“It’s not an easy thing to do,” he said. “But … I have every confidence that they can rise to this challenge, and I think all of us in this county will benefit.”

Since the $2.5 billion bond referendum was approved in August, Zeve said the HCFCD has filled 46 positions, including nine engineering positions, four technicians and eight inspectors. The district still has 46 openings and is actively looking to fill 14 specific roles. The most challenging positions to fill have been construction inspectors and construction project managers, he said.

Collins said the flood control district also faces competition for civil engineers from the Texas Department of Transportation—which has been tackling projects with state funding provided by propositions 1 and 7, passed in 2014 and 2015, respectively—and water authorities building surface water pipeline projects as well as private developers.

“Of course, salaries have gotten higher,” he said. “I certainly would advise any high school student looking into STEM programs to consider civil engineering. I kind of wish I was getting out of school right now.”

One of the methods the HCFCD is adopting to overcome its hiring woes is something Zeve referred to as “staff augmentations”—a contract between the flood control district and an engineering firm in which the firm provides all the engineers and laborers themselves. Cagle referred to the relationship as “managing the managers.”

Zeve said 13 different staff augmentation contracts have been signed off on so far for flood projects. In the past, he said the district has always just hired its own engineers for projects.

Collins said the method works well in this situation.

“You see that on a lot of big programs,” he said. “Flood control doesn’t have to go out and hire those engineers. It’s their job to do the national searches and do all that work of trying to do the projects.”

The flood control district has advanced a number of bond projects in the Cy-Fair area since the funding was approved by voters in August, but other projects are still awaiting action, and some residents said they want to see efforts sped up.

The bulk of the funding that has been approved in Cy-Fair so far has gone to the Little Cypress Creek watershed, including about $39 million for nine detention basin projects that are meant to increase storage capacity for stormwater along the creek. Most of the money so far has paid firms for design, bidding and construction- stage engineering services.

On Cypress Creek, the county is pursuing land purchase agreements with the goal of converting land back into detention or green spaces. The county is in talks for over 20 different parcels, which Zeve said range from small tracts deep in the floodway to major tracts larger than 100 acres.

No county money has been authorized toward land acquisition in Cypress Creek yet. However, the county is negotiating to purchase nine of the 27 holes at the Longwood Golf Course, which rests right alongside Cypress Creek in Cy-Fair, Zeve said. The land would be used to expand an existing detention basin on site, he said.

Zeve said the HCFCD prioritizes projects based on which ones will improve drainage and reduce flooding risk for the most people. The flood control district is finalizing the guidelines for how it plans to prioritize bond projects, and a master timeline could be released in June.

At community engagement meetings that have been hosted by the HCFCD over the past few months to discuss various Cy-Fair area projects, the general feeling among attendees was that things were moving in the right direction. However, many attendees said they would like to more projects move from the discussion phase to actual implementation.

“It’s never fast enough, but that’s the nature of many projects,” said Vernon Vanis, a resident and director of the Cypress Forest Public Utility District. “I think there are a lot of projects planned or being discussed but not a lot that have been implemented yet.”

Cagle said overall, he has been impressed with the amount of work the district has taken on at once.

“In a few months from now, [the HCFCD] is going to end up spending per month what we had been spending per year in capital projects, which is a pretty impressive acceleration of our schedule,” he said. “I’m asking them to even double that schedule, so it’s a pretty massive thing.”