Underground tunnel could be part of flooding solution for Cypress Creek 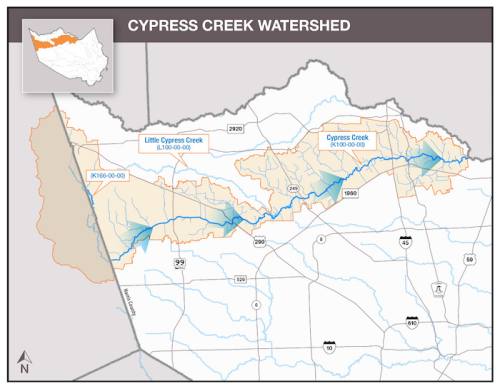 Cypress Creek spans across the northern part of Harris County.

Flood control officials in Harris County are studying the feasibility of building underground tunnels to carry water throughout the county, which could potentially reduce the strain on creeks and bayous during heavy rainfall.

Brian Gettinger—tunneling services leader with Freese & Nichols Inc., one of the engineering firms to show interest in the study—said he thinks the concept could work on Cypress Creek.

Gettinger pitched the tunnel system to the Cypress Creek Flood Control Coalition at the nonprofit's annual meeting in March. He said if the tunnel becomes a reality, it could cost $2 billion-$3 billion and would take years to build.

"Tunnels are an option of last resort," he said. "You do them because everything else is too expensive, too environmentally challenging to permit, or people don’t let you do it because they don’t want their [property] torn up."

Where the tunnel would start and end would have to be determined as a part of a routing study, Gettinger said. One possible route he suggested would involve starting around the Kickerillo-Mischer Preserve at Hwy. 249 and Cypresswood Drive, traveling down Hwy. 249 to Beltway 8 and then going along Beltway 8 to Lake Houston. The tunnel could end at Lake Houston or potentially be extended to the Houston Ship Channel, he said.

Putting the route along major highways would reduce the amount of right of way the county would need to purchase, and the preserve would make a good starting point because of its existing capacity to hold stormwater, Gettinger said.

"Part of the design concept is to prevent sediment accumulation," he said. "The reason I indicated we should start this at a detention facility is because those detention facilities have lower sediment load than the side of the channel."

Matt Zeve, deputy executive director with the Harris County Flood Control District, also spoke at the March meeting. He said tunnels can be a viable alternative to widening a creek or bayou, a process that can entail rebuilding bridges, moving utility lines and buying property.

“What an underground tunnel does is … it allows us to avoid all those things," Zeve said. "In fact, if we were to build a tunnel here in Harris County, you wouldn't even know it was going on because it would be 200 feet beneath your feet. You wouldn’t be able to feel it, see it, smell it, hear it.”

The tunnel could be excavated using machines that are capable of mining 2-3 miles per year, Gettinger said. A hypothetical tunnel along the 25-mile route from Hwy. 249 to Lake Houston could be done in segments that could be carried out simultaneously, he said.

"This tunnel could be built in, say, five years of construction," he said. "We’re probably three to five years away from starting construction if everything happens in the best possible way. You have to think about it in a generational-investment mindset."

HCFCD received a $320,000 grant in February to conduct a feasibility study into whether a flood tunnel can be supported by the geology of Harris County. Another $2.5 million has been set aside for two future studies that would determine the cost of building a flood tunnel, the amount of water the tunnels can move, and where the water will be transported to and from, among other details.

Other Harris County waterways Gettinger said he thinks could benefit from a tunnel include Buffalo Bayou and Brays Bayou. With a price tag of roughly $2.5 billion, any flood tunnel would likely depend on federal funding sources, and Zeve said the district is in negotiations with the Federal Emergency Management Agency to find that funding.