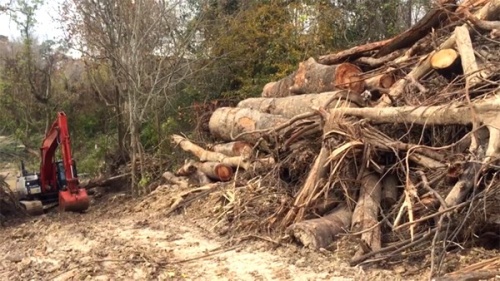 Crews with the Harris County Flood Control District use heavy equipment to clear blockages from creeks and bayous.

Officials with the Harris County Flood Control District announced at the start of June that they have ramped up efforts to remove heavy debris that was washed into Cypress Creek during Hurricane Harvey.

From late 2017 to early 2018, HCFCD crews removed approximately 28,378 cubic yards of debris from the Cypress Creek watershed. However, officials said additional debris, including downed trees, have since accumulated, which can cause blockages in stormwater flow.

The debris removal in June will be taking place over the course of several weeks between Huffmeister Road in Cy-Fair and I-45. The work will involve the use of airboats, barges and heavy equipment, including chainsaws.

HCFCD officials said they will be accessing the creek via property owned by the county and public right of way, but the work will cause noise and vibrations—from airboats and chainsaws—as well as dust. Debris will be temporarily stockpiled on the sides of the banks before being transported to a disposal site. Residents are advised that debris could be stockpiled at the side of banks overnight or for several days in some cases.

Crews will document site conditions before, during and after debris removal to ensure sites are cleaned up and any damage is repaired when work is completed, HCFCD officials said.

The removal of debris from Cypress Creek is part of an ongoing effort to remove Harvey debris from bayous and creeks across the county. Residents can report blockages online or by calling 713-684-4197.