support local journalism become a community patron Community impact Newspaper's mission is to build communities of informed citizens and thriving businesses through the collaboration of a passionate team. Consider supporting our journalism efforts by becoming a Community Patron today.
Continue Reading contribute today
sign up for our newsletter become a community member Community Members have access to our e-edition and can sign up for our daily e-newsletter
Already a Member? Sign in
Sign up now
Election - Texas 2020 Primary

Approximately 360,326 votes, or about 94.02% of all participating Republican voters, were cast in support of Trump as the party nominee across the six Houston Metro counties, and another 179,292 ballots, or 38.7% of Democrat voters, chose Biden to represent the Democrats in the November presidential election.

Trump also dominated the largely uncontested Republican Party primary throughout Texas, recording 94.05% of all primary votes, while Biden is projected to receive the most Democrat primary votes, about 32.41%, according to Texas Secretary of State unofficial results. U.S. Sen. Sanders, I-Vermont, received 29.72% of all statewide votes and former New York City Mayor Michael Bloomberg earned 15.49%. U.S. Sen. Elizabeth Warren, D-Mass., placed fourth in the Democrat primary with 11.64% of the 1,653,588 votes counted as of 7 a.m. Central time March 4. 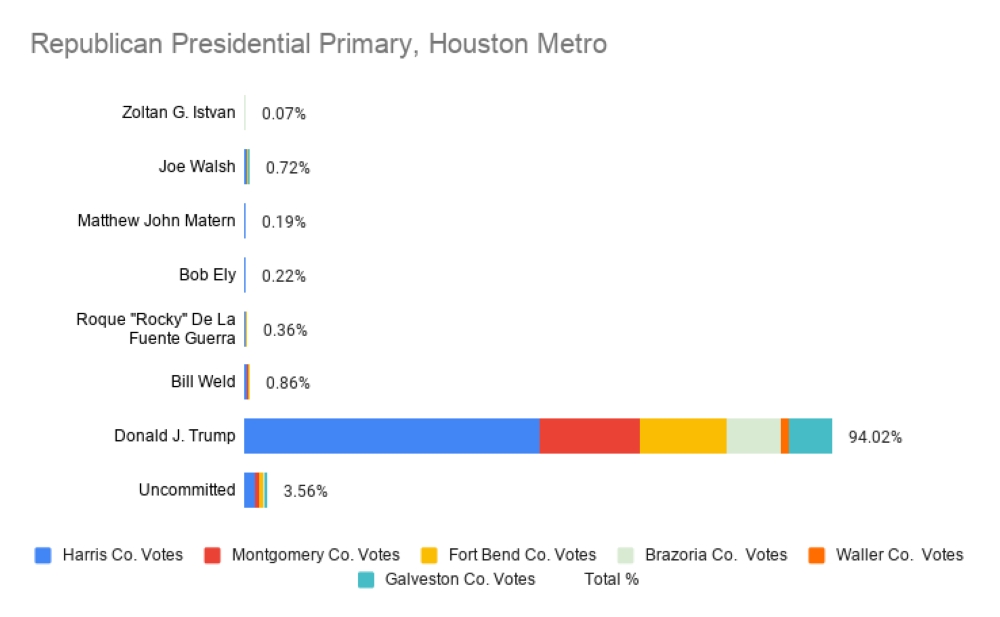 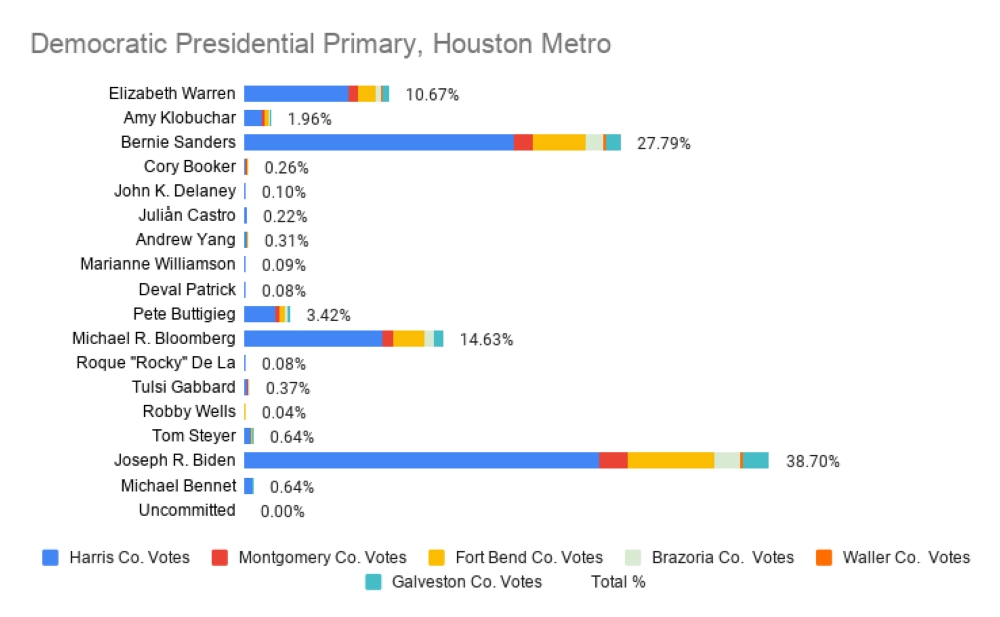 Hegar bested the other Democratic candidates statewide, with 22.28% of the nearly 1.85 million Democrat votes cast in Texas, resulting in a May 26 runoff against Texas State Sen. Royce West, D-Dallas, who has 14.52% of votes counted. Third-place candidate Cristina Tzintzun Ramirez received 12.76% of all votes, failing to make the runoff election, which occurs between the top-two candidates if no one receives more than 50% of the vote.

Cornyn received 76.31% of the 1.95 million Republican state primary votes. He will appear as the Republican nominee on the Nov. 3 general election ballot. 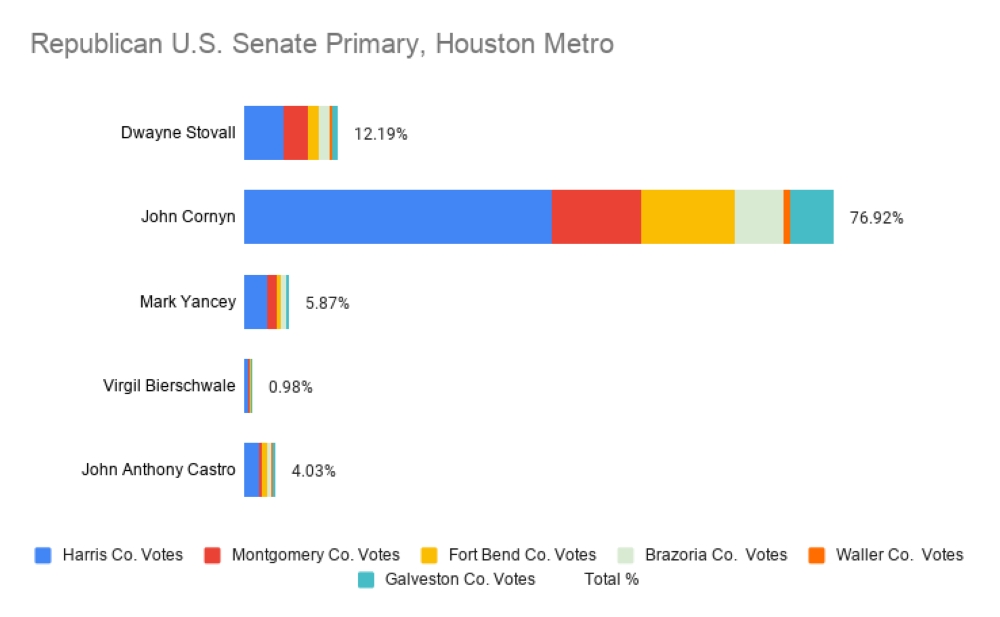 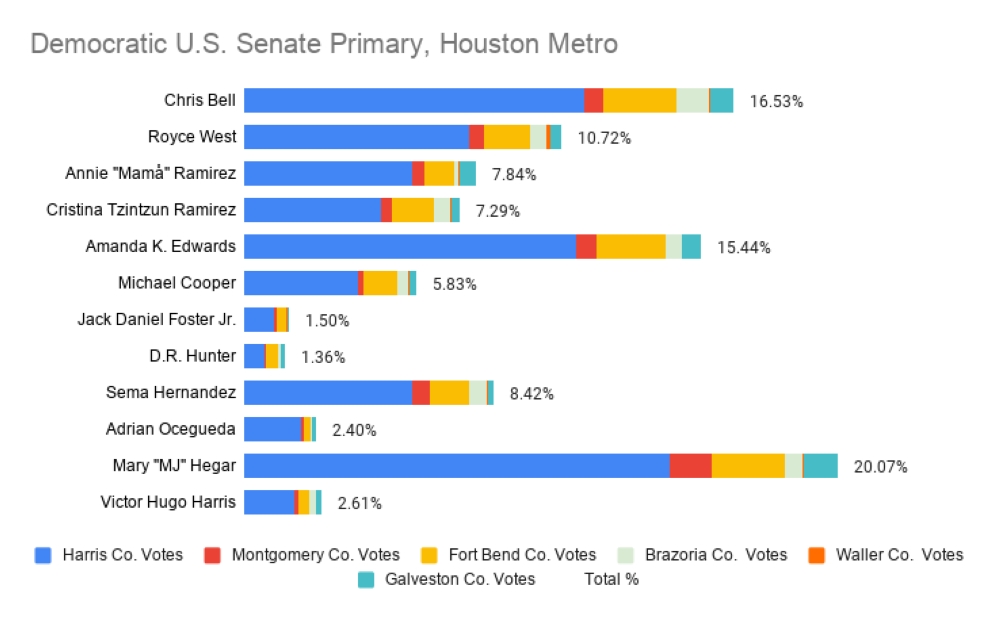 Texas Primary Election 2020 us senate us president
SHARE THIS STORY

The number of active cases in Cy-Fair has not been this low since late November, but 34 local residents died with COVID-19 in February—up from 16 in January.