contribute today
As Harris County officials embark on a new effort to improve access to early childhood development programs within the county, Judge Lina Hidalgo has announced the first of several "listening sessions" that will be used to gather input from residents.

In a Feb. 5 press release, Hidalgo's office announced the first session will take place from 3-5 p.m. Feb. 15 at the Health Museum, 1515 Hermann Drive, Houston. The county also launched a new website where residents can learn about the initiative and how to contribute feedback.

"Right now, we’re in the early stages of planning this new initiative and would like to build the county’s vision alongside the families, practitioners and other stakeholders who think about early childhood development every day," Hidalgo said in a statement. "We urge anyone interested in shaping the future of Harris County to join us.”

Both during her State of the County address and in the Feb. 5 announcement, Hidalgo connected early childhood education to the likelihood of children succeeding later on in their education and career lives.
RELATED STORIES

“If you think about the best public programs that a government could enact, you can’t look any farther than early childhood development," she said in her Nov. 15 address. "It’s just about the gold star of something a government can do for its community.”

In the recent announcement, Harris County cited the Perry Preschool Project, which started in 1962 and followed 123 preschool students over the course of 40 years. The study found students who had access to high-quality early childhood education had higher rates of graduation and employment as well as fewer interactions with the criminal justice system.

Details on what kinds of investments Harris County could make in the realm of early childhood education or what actions the county will support are to be determined. Residents can sign up online to receive updates on future listening sessions.
Harris County Lina Hidalgo Early Childhood Education
SHARE THIS STORY 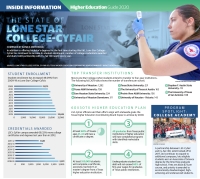 Lone Star College-CyFair has continued to increase its student enrollment and dual-credit partnerships over the years.