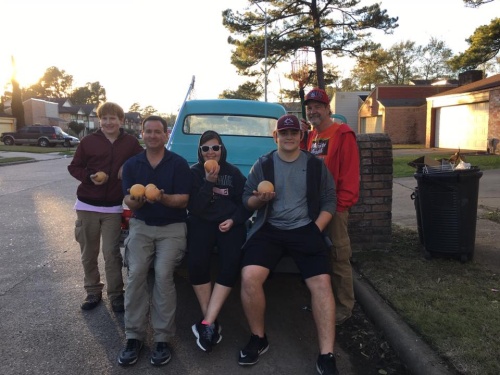 Austin Greer launched a nonprofit at the age of 13 and has continued to expand.

Seeing a need, Cy-Fair High School sophomore Austin Greer took it upon himself to start a program that provides fresh produce for local food pantries. Since launching nonprofit Greer's Green Garden in 2015, he has recruited students and volunteers in the area through word of mouth.

“I started it basically with a website, friends and family members,” he said. “I wanted to start growing plants and sending those fruits to the food bank to help those who can’t afford to purchase those fruits be able to attain them.”

Greer, along with the students and community members that volunteer with him, grow and harvest fruit in local neighborhoods. Members buy plants from local shops and grow them on their own time.

Greer’s Green Garden donates produce to local food banks in need. Greer uses a Ford F-100 to transport equipment and produce, and he modified other energy-efficient equipment himself to harvest plants.

“Those are some of my own personal projects that I thought we could use them for the community,” he said. “If you’ve got a fruit tree and you don’t want the fruit, you don’t want to pick it or it’s too high up...we’ll come pick that and donate it. We actually donated 100 gallons of grapefruit because of that.”

A year after starting the project, Greer began a club at CFHS to increase membership with classmates. This year, Greer began another branch of the club in the recently-opened Bridgeland High School and said he hopes to keep branching out after he goes to college.

“I thought we should take this thing a step further and start a club,” he said. “I know people at school, but I may not know people in the community, so let’s tap that resource.”

In the future, Greer’s Green Garden hopes to open a community garden where the group can have a central location to grow and distribute food. Although the group aims to grow less perishable fruits like jalapenos, peppers and tomatoes, Greer said he also seeks fruit from skilled producers.