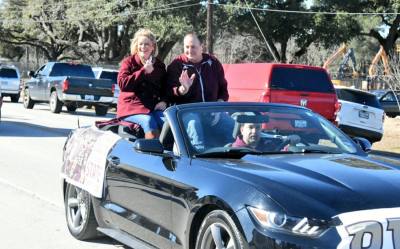 In case you missed it, the Cy-Fair High School Bobcats defeated Waco Midway Dec. 23 to secure the Class 6A Division II state championship title for the first time in program history.

Once students and staff returned from the holiday break, Cy-Fair ISD spent the week celebrating with Bobcat merchandise, a new billboard, special media appearances, a surprise visit from State Rep. Tom Oliverson and a community parade and rally to cap the festivities off on Friday afternoon.

How we do things in Cypress! pic.twitter.com/R7dJLcOJqa

As part of his visit, Rep. @TomOliverson invited the @CyFair_BFND football team to Austin where he'll recognize the Bobcats. Each coach and player also received a certificate. #txhsfb pic.twitter.com/ayBmKZ1jnv

Friday afternoon, community members came out for a parade and rally at the CFHS campus.


Pre-parade festivities at @CyFair_BFND, where Michele Smith’s culinary students made some delicious cake for the #uilstate champion Bobcats. #BFND pic.twitter.com/jQVUaJhCWw

The Class 6A Division II state champions to be honored by the Cy-Fair community. #txhsfb pic.twitter.com/kqpQLocRq8

The 2017 Class 6A Division II #UILState champion Cy-Fair Bobcats are honored with a parade and community rally. #txhsfb pic.twitter.com/9JEWV4V5u4

First a parade and now the pep rally...