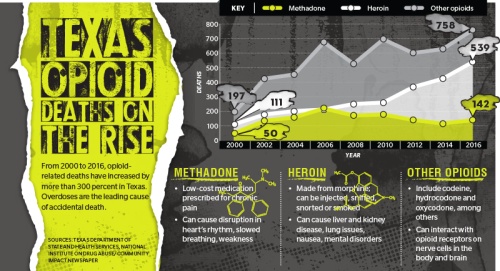 Joshua Steenburg grew up in Canada with dreams of becoming a hockey player, but after his family moved to the Greater Houston area, he said his friends pressured him to start smoking marijuana around age 15.

After high school, he took his first ecstasy pill and became more adventurous in his drug use, taking mushrooms and acid. Soon, he learned that snorting OxyContin resulted in a stronger high.

“I always tell people the high feels like your mother’s arms because you feel so safe and secure, and you don’t have a problem in the world,” he said. “I needed more, and if I didn’t have any I’d get these cold sweats and body sores. All the money I made went to OxyContin, and I knew I was addicted now.”

Steenburg became part of the opioid epidemic—a national issue that claimed nearly 40,000 lives in the United States in 2016, according to the Centers for Disease Control and Prevention. Of those, nearly 1,500 deaths occurred in Texas, according to the Texas Department of State and Health Services.

Matt Feehery, senior vice president and CEO of Memorial Hermann Prevention and Recovery Center, said opioids are highly addictive in nature, and a person can become dependent in as little as seven days. Physicians sometimes over-prescribe opioids, but they are also becoming easier to access online and through the mail, he said.

Mary Beck, chief strategy officer at The Council on Recovery, said the Houston nonprofit receives about 1,200 calls every month from people all across the Greater Houston region seeking help for themselves or a loved one dealing with addiction. Overdoses are the leading cause of accidental deaths in the U.S., and the same statistic is true for Houston, she said.

On Oct. 26, President Donald Trump declared the opioid crisis a National Public Health Emergency, meaning existing funds could be reallocated to the issue, but the federal government will not increase spending.

Monica Villarreal, a mental health policy fellow at the Austin-based Center for Public Policy Priorities, said because Trump’s declaration does not increase funding, it will not have a significant effect.

Rep. Kevin Roberts, R-Spring, said in his district—which covers portions of Cy-Fair and Spring—opioid addiction affects residents just as much as any other region of Texas.

“We’re not immune to the issue,” he said. “These drugs don’t care about your affluence or your [location] or demographics. We would be putting blinders on to think that it’s not a problem in this area.”

In addition to providing more treatment options to meet the growing need, Beck said she hopes the state invests more in educating adults—not just students—on the proper uses and dangers of opioids. Physicians must also take responsibility in dispensing safe doses of opioids and encouraging the proper disposal of unused opioids, she said.

In his Oct. 26 remarks, Trump said federal officials are working with medical professionals to implement best practices for prescribing opioids, and the National Institutes of Health is developing nonaddictive painkillers.

In May, the Texas Health and Human Services Commission received $27.4 million in federal funds to prevent and treat opioid dependence. The money will help about 14,000 people over two years by expanding access to and capacity at treatment centers, increasing prescriber training and enhancing recovery services, according to HHSC officials.

Trump said the national Opioid and Drug Abuse Commission is pursuing innovative approaches like drug courts—programs that give nonviolent drug offenders an alternative to jail time—that have been proven to work.

Roberts, who will serve on the committee, said he believes accountability starts with pharmaceutical manufacturers and trickles down to the physicians prescribing drugs. However, federal, state and local government play an important role as well, he said.

“My goal is that we identify causes to the issue, programs and treatments that have worked historically and...we assure that we have an adequate number of treatment facilities and programs and that we fund them adequately,” he said.

Villarreal said addiction is a medical problem, but many conservatives view it as a “personal responsibility,” so legislators have been slow to make progress.

“It’s almost like people choose to use drugs, and therefore people should go to jail,” she said. “These two views are in constant conflict, and I think in Texas it’s taken a long time to move to the medical model perspective.”

Officials said from pain management prescriptions after surgery to self-medicating mental health issues, individuals turn to narcotics for a variety of reasons.

Meanwhile, in Harris County Constable’s Office Precinct 5—which covers the western portion of Cy-Fair—Narcotics Division Sergeant Tony Cartwright said the department has seized several pounds of opioids and other narcotics this year. Precinct 5 is working with area agencies on a heroin case that could result in significant seizures, he said.

The Drug Enforcement Administration’s National Prescription Drug Take Back Day is an opportunity for community members to anonymously drop off expired or unused prescription drugs so they can be properly disposed. The CFISD police station has become one of the nation’s largest collection points, collecting 35 boxes of drugs over two days in 2016, according to district police.

Jersey Village Police Department participated in the event Oct. 28 and collected 11 large bags of unused drugs—the most the department has collected at any event in the program’s history, Police Chief Eric Foerster said.

“Codeine-based cough syrups are probably the [most] abused [in this area],” Foerster said. “It’s fairly inexpensive, so it can reach everybody.”

“Typically individuals addicted to drugs who can’t hold down steady employment will turn to crime to feed their addiction—selling stolen items or burglarizing pharmacies,” he said. “You can place guidelines and laws, but if the community as a whole isn’t doing anything to help overcome addiction, then it doesn’t matter,” he said.

Asim Shah, chief of psychiatry at Ben Taub Hospital in Houston, said when patients come into the hospital intoxicated, doctors can provide detoxification but then have to refer them to area recovery centers.

However, waitlists in Harris County are often two weeks or longer, and in that time, addicts go back to using.

“It’s a revolving door,” he said. “They go back to using, and they come back to us. We need money for rehabs and treatment facilities to help those patients.”

When Steenburg finally admitted his addiction to his parents, they urged him to give the Memorial Hermann PaRC a chance. Now three years sober, he is fully supporting himself in a job he is passionate about—working at a local ice skating rink. He said he hopes to open three sober living houses to give others the same second chance he had.

“There are plenty of treatment centers in the region if you have the resources or insurance to pay for it,” Beck said. “There’s not if you don’t.”

The Council on Recovery serves both populations through intensive outpatient clinical services and their Center for Recovering Families, which offers therapy and education for addicts, their children and family members.

“I do see hope in the sense that we’ve been here before,” Beck said. “We’ve had other drug epidemics, but it took efforts at the federal, state, local and individual level.”
SHARE THIS STORY