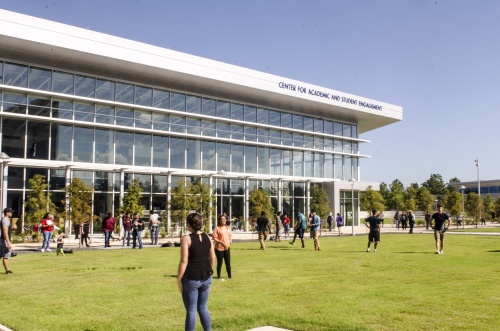 The LSC-CyFair Center for Academic and Student Engagement opened on campus this fall.

The Lone Star College System opened LSC-CyFair’s $26.6 million Center for Academic and Student Engagement at the start of the fall semester. However, the opening of LSC-University Park’s Center for Science and Innovation has been delayed after sustaining flooding damage caused by Hurricane Harvey.

The $15.4 million Center for Science and Innovation was scheduled to open on Hwy. 249 at the beginning of the fall semester but is now slated to open in spring 2018, LSC-UP President Shah Ardalan said.

Both buildings are part of LSCS’s $485 million bond package that was approved in 2014. Ardalan said selling bonds is the most common way for community colleges to fund new buildings.

“Our approved budget supports the operational costs of providing education to our community, but it does not fund new buildings,” Ardalan said.

Construction of the Center for Science and Innovation was 95 percent complete before the building’s ground floor took on 12 inches of water during Harvey. Ardalan said all damage incurred—including to drywall, furniture and electronics—is covered by insurance.

The flooding has not changed overall construction plans for the building, but LSC-UP officials are considering measures to prevent future flooding, said Richard Weldon, LSC-UP vice president of administrative services.

“We are examining the possibility of building a berm or retaining wall in the area that received the most overflow of water from the adjacent flood control ditch,” Weldon said.

The three-story, 50,000-square-foot building will include 12 science labs, an astronomy observation deck and a geology rock wall. Weldon said 10 faculty members, eight lab staffers and four division staff members—including the dean of math and science—will be housed at the building.

Weldon said LSC-UP did not previously have enough classroom space to offer all the lab courses students need to graduate, and the new building will address the shortage.

LSC-UP also plans to open a $23.7 million arts building in 2019 with space for visual arts, music and theater programs.

LSCS officials hosted a ribbon cutting for the the new Center for Academic and Student Engagement—also known as the CASE building—on Nov. 10.

LSC-CyFair President Seelpa Keshvala said the building, which was also included in the 2014 bond, is intended to accommodate a campus where enrollment numbers continue to grow. Enrollment at LSC-CyFair has grown by 13 percent to 22,125 students since the bond was passed in 2014, she said.

Keshvala said the space immediately proved to be popular among students, who are using it to study, work on group projects, plan events and host club meetings. She said students choosing to spend time on campus between classes is linked to academic success.

“Whenever you walk into the student life space, it is full of students,” Keshvala said. “Our challenge now is to help students want to leave once they get there. That is unlike anything I’ve seen before.”

Meanwhile, work is progressing on another LSC-CyFair bond project underway in the Beltway 8 Corporate Center. The 130,000-square-foot Westway Park Technology Center is expected to open for the fall 2018 semester. Keshvala said a contract could be awarded for construction at the Dec. 7 board meeting. A total of $6.2 million was set aside for the center in the 2014 bond.

“The campus is poised perfectly for that because it’s in the corporate park,” Keshvala said. “There are lots of IT startup companies in the area.”

LSC-CyFair has been working with an advisory board with representatives from local companies to help develop programs for the facility. Keshvala said students will have access to internship opportunities with the goal of creating a seamless transition from the classroom to the workforce after graduation.

LSCS is working with the Texas Higher Education Coordinating Board to offer bachelor’s degrees in applied technology at the center, Keshvala said.

“[Advisory board] members we spoke to are excited about that because they know there’s talent being developed to fill those jobs they are going to need in the future,” she said.
SHARE THIS STORY