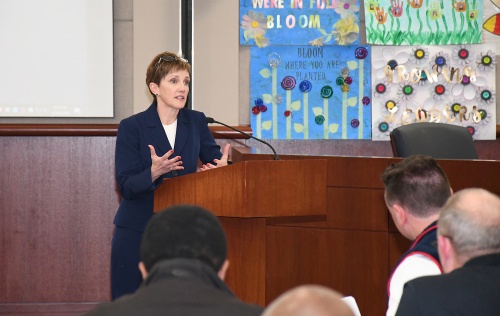 The bond money would be used to fund a new middle school, elementary school, instructional support center and performing arts center, among other initiatives. See the full proposal here.

CFISD’s long-range planning committee presented their final recommendation to the board Feb. 4. The total cost of the district’s needs was broken down into the following categories:

“Our committee truly believes that these are real needs in order to effectively address the safety and security of our students, the protection of our existing facilities, necessary improvements in technology and the continued growth of the Cypress area,” committee co-chair Julie Hinaman said at the Feb. 4 presentation.

District officials are conservatively projecting the bond’s passage would result in an incremental tax rate increase over time. However, Chief Financial Officer Stuart Snow said the 2014 bond referendum called for a similar increase, but the district ended up not needing to raise taxes.

Starting in 2021, the interest and sinking tax rate would incrementally increase by about 0.6 cents each year until 2025, when the total increase reaches 3 cents, Snow said. This would not affect homeowners over the age of 65 who have filed for additional exemptions.

The committee—a group of about 50 parents, students, district staff, business leaders and community members—convened nine times from November through January to discuss projects that should be included in the recommendation to meet district needs through 2025.

Early voting runs April 22-30. Informational meetings will be held throughout the community from March 4-May 3, according to the district. Visit www.cfisd.net for more information.