After Hurricane Harvey, Houston's economic outlook is brighter than you might think 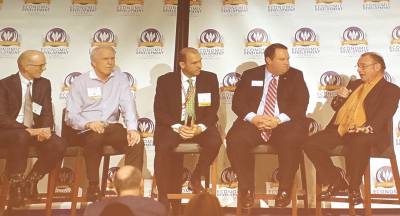 Although Houston has weathered economic storms in recent years—from an oil and gas downturn to Hurricane Harvey—there are reasons to be optimistic about the city's future, said Ray Perryman, president and CEO of the Waco-based economic research and analysis firm The Perryman Group.

In his keynote speech at the Houston West Chamber of Commerce’s annual economic development summit  Friday, Perryman explained that in the 1980s, Houston’s oil price and rig count fell about 75 percent and the industry moved from about 305,000 employees to 175,000 employees.

These numbers were about the same in 2014’s oil industry downturn, he said. However, while the state lost 300,000 jobs in the first downturn, it gained 380,000 in the two years following the second. While Houston’s job growth was not as strong as previous years, gaining jobs at all was a good sign, Perryman said.

“It’s kind of like when you’re going 80 in your car and then you have to go 15, you feel like you’re going backwards,” he said. “But you’re not—you’re just not going forward as fast as you were before.”

Perryman said during the first downturn, the state’s workforce consisted of about 6 million people, a number that has since doubled. Texas did not lose jobs the second time around because the economy is much more diverse now, he said, which can partially be attributed to Houston’s growth in industries such as international trade, health care and technology.

Because of the city’s thriving economy, Hurricane Harvey is not expected to have a long-term negative effect on local development, he said.

Perryman also said disasters like Harvey do not stay in the news cycle as long as they once did, so it likely will not deter many developers and businesses looking to come to the Houston area.

“It’s clearly something that’ll be in peoples’ minds, but as far as the top 10 things most people are going to look for when they’re looking for a site selection, I don’t think the fact that you had a storm last year that was of 1,000-year proposition is going to make a big difference,” he said.

Here's how many jobs are expected to be added through 2022 by industry: