“Once [a customer] decides to come in, once we put the plate on the table, they start to realize that they have found a hidden gem,” she said.

Yasmin co-owns Hailey’s with her husband, Reyes, who serves as the head chef. The eatery, which opened in September 2018, is named after the Maldonados’ 3-year-old daughter. Two of the most popular pasta dishes are also named after their two sons, Dylan and Nathan.

All of the recipes were devised by Reyes, who has more than 20 years of experience cooking Italian food at restaurants, Yasmin said. All sauces are prepared and all breads are baked fresh every day before the restaurant opens, a process Yasmin said takes hours.

“You can go through our entire kitchen, and you will be surprised we don’t even have a microwave back there,” she said. “Your food is made-to-order for guaranteed freshness.”

Reyes specializes in pastas and traditional Italian dishes, such as chicken piccata and chicken parmesan, but the restaurant also offers several salad and pizza options.

Yasmin said one of the most popular dishes is the Reyes chipotle pasta, made with penne pasta, asparagus, bell peppers, mushrooms, peas and cilantro and served in a spicy chipotle cream sauce.

For the Maldonados, both first-time restaurant owners, running Hailey’s has been a labor of love that spawned from a desire to connect with customers on a more personal level. Both Yasmin and Reyes said they appreciate the support they have gotten from the Cypress community, and there is nothing else they would rather be doing.

“It’s been a dream for years, praying about it and waiting for the right opportunity,” Yasmin said. “It’s something we come in and work hard for everyday, and we are determined to keep the dream alive.”
Tags: Cy-Fair January 2020 , Haileys Italian Restaurant
SHARE THIS STORY 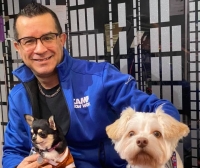