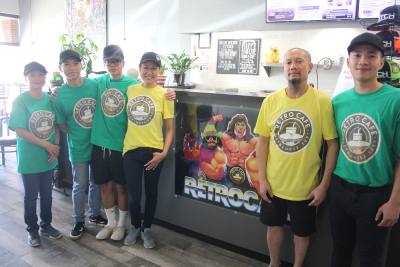 Tonee Nguyen and his wife Phoenix Pham know their restaurant, Retro Cafe—located on Hwy. 290 near Mueschke Road in Cypress—is not a typical Vietnamese restaurant at first glance.

When customers walk in, the first thing they see is a large mural of classic cartoon and video game characters painted by one of Nguyen’s friends. The walls are decorated with shelves featuring items from Nguyen’s vintage toy collection, which includes everything from Marvel and “Star Wars” figures to Korean and Indian versions of the original Nintendo Entertainment system.

Despite the nontraditional look, Retro Cafe’s menu is made up of Vietnamese staples, including banh mi sandwiches, pho and vermicelli. Recipes can be traced back on both sides of the family, Nguyen said. His father used to run pho restaurants in Seattle, and Pham’s mother owned several Vietnamese sandwich restaurants in Tomball in the 1990s, he said.

“I grew up around pho, but I knew nothing about sandwiches,” Nguyen said. “My dad gave me his recipe [for pho], and her mom gave us her recipe for the sandwiches.”

Nguyen said dishes are made with premium meat, and pho uses minimal MSG. As a result, the broth has to be cooked for 12-14 hours, he said.

“The MSG is used to cut down on the time,” he said. “Traditionally, people who made pho never had MSG. They cooked it longer. By cooking it longer, you extract the bone marrow, and it just makes it more traditional.”

Business has been good for Retro since it opened in July 2018, Nguyen said. Some customers who previously went to Bellaire for Vietnamese food have made Retro Cafe their new stop, he said.

“We’ve had a lot of people coming in from word of mouth, especially in the Fairfield area,” he said. “I’ll sometimes give kids toys to take home, like a Hot Wheels car. We’ve got a good mix of regulars and new people coming in.”