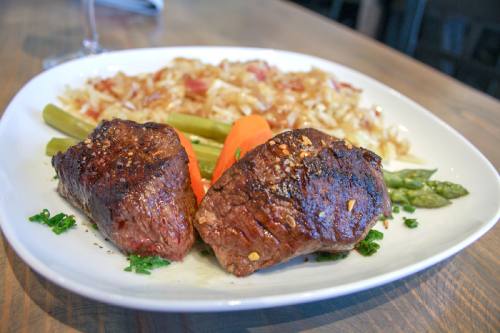 The Edelweiss Filet is served with an onion gravy and rosti potatoes or pasta and apple sauce, red cabbage or vegetables.

After 30 years in the oil and gas industry, Will Payne said he joked to his wife, Michele, about moving to Italy to open a restaurant. Around that same time, their friends Markus and Pia Klauser visited from Switzerland and shared their plans to move to Texas to open a restaurant.

The two couples decided to partner on the venture together and opened Edelweiss Restaurant in July.

Named after the Swiss national flower, the eatery serves authentic Swiss cuisine. Markus said he prepares each dish to order with fresh ingredients, and Edelweiss is the only restaurant of its kind in the Houston area.

“I think this was a good idea to bring Swiss dishes together with Texas flair,” he said.

The restaurant’s signature dish is raclette cheese, which can be melted over any dish on the menu, including schnitzel, alpermagronen and bratwurst.

Raclette grills sit in the center of tables and act as an indoor campfire of sorts, inviting patrons to melt cheese over different ingredients, Will said. Diners can order themed flights of meat, fruit and vegetables for $17-$25 per person.

He said their vision is for the restaurant to be a gathering place for people to slow down and have conversations with one another.

“Forget about your work, your troubles and just have a good time together,” Will said. “Take your time; don’t rush. We have people sit here for hours enjoying themselves.”

As the business becomes more established, Markus said he hopes to add lighter fare options to the menu and serve lunch throughout the week. Will said he would eventually like to expand the restaurant to a larger space that features a beer garden and a more authentic Swiss Alps chalet atmosphere.

“In the mountains when people are doing their hikes and walking through the mountains, there’s little way stations with restaurants that they go to,” Will said. “All these dishes are typical in these little stations … to rebuild their energy and get them going again so they can do a two- or three-day hike.”