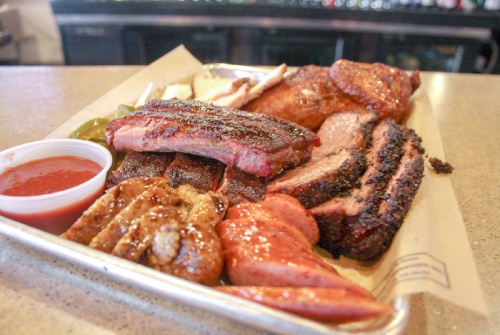 Launched in 2018, Cypress Trail Hideout on Hempstead Road is billed by its founders as a celebration of Cypress history and Texas barbecue.

The restaurant—founded by Pat and Maria McGinity and Ray and Deborah Pikulski—has direct ties to Cypress history, with the main dining room made from the footprint of a home first built in the 1930s along the Hempstead Wagon Trail. Two towering oak trees on-site have been around for nearly 80 years, Pat said.

“We’re so unique to Cypress, and we just want to be part of the community,” he said.

Diners at the restaurant can choose from two menus: one offering a variety of appetizers, sandwiches, burgers and house specialties, and another focused entirely on barbecue, including brisket, pork ribs, sausage, boudin, smoked turkey and pulled pork.

The barbecue—the restaurant’s top-selling cuisine—comes courtesy Wes Jurena, the founder of Pappa Charlies Barbeque who partnered with the McGinitys and Pikulskis. All barbecue is cooked fresh every day, he said.

Jurena said he balks at titles such as “head chef” or “pit master,” instead referring to himself as “a guy who likes to cook.” In addition to traditional fare, he said he enjoys trying new things while barbecuing. Recently introduced menu items include chicken-fried ribs and a grilled brisket and macaroni and cheese sandwich, Jurena said.

“We’re always trying something new, trying to see what people like,” he said.

With its 51,000 square feet of patio space, McGinity said he was going for an Austin-style, family- and pet-friendly icehouse atmosphere. An outdoor stage for live music replicates the famed music venue in Luckenbach, Texas.

“The first year, the overall response from the Cypress community has been awesome,” Jurena said. “We’re looking forward to more in the years to come.”