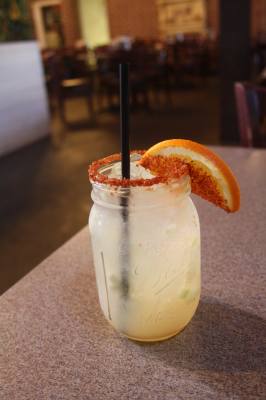 The new Cypress location of BB's Cafe features the South Texas Jazz on the drink menu.

Deep Eddy Vodka, muddled cucumber, agave and lime juice are shaken and topped with Topo Chico, an orange slice garnish and a Tajin spice rim to make the South Texas Jazz. The cocktail is sold for $10 at BB’s Cafe in Cypress.

General Manager Emily Allen said the restaurant’s drink menu is well-rounded to include local craft beers, wine and handcrafted cocktails, margaritas and hurricanes. The eatery’s “Tex-Orleans” style carries over from the drinks to the food, she said.

“We have a Cajun flair with that New Orleans style food, but we also put a Texas twist to it,” Allen said. “Our entrees have queso or peppers and different spices. So it’s not just your normal Cajun food—it’s our own signature style.”

The Black-owned business offers products for all hair and skin types.