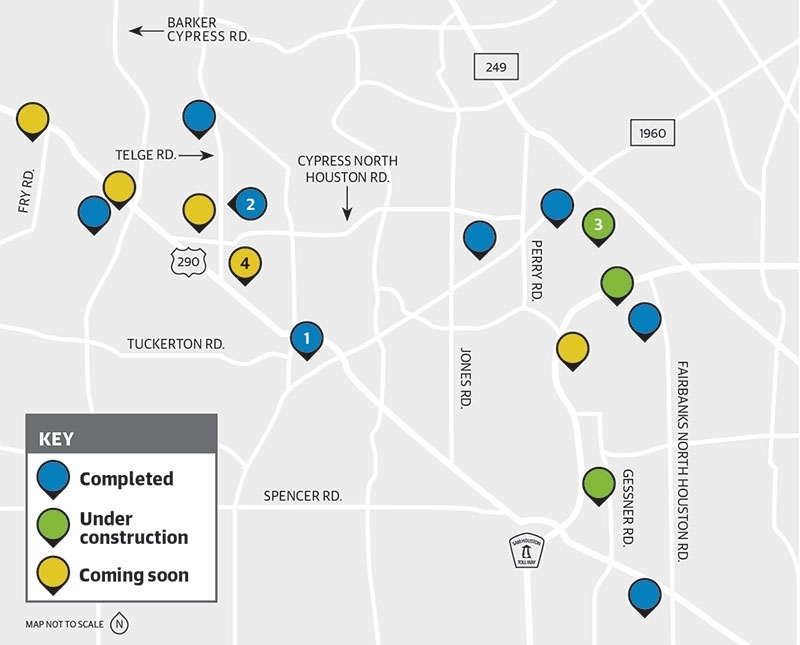 About 100 of Cy-Fair’s 500-plus industrial facilities have opened since the start of 2016, according to data from Caldwell Cos.

Economy and land experts said Cy-Fair is a strong target for warehouse and distribution space because of its access to major thoroughfares such as Hwy. 290 and Beltway 8 as well as the availability of open acreage.

“Land inside Beltway 8 is getting very expensive, and [it is] very hard to find large tracts of land, and so the developers are moving out towards [the] Grand Parkway,” said Patrick Jankowski, senior vice president of research for the Greater Houston Partnership.

While several new industrial facilities have been completed in Cy-Fair recently, many still sit empty. Jankowski said the Houston region’s industrial vacancy rate has been “going in the wrong direction” for the past several years because developers overbuilt in response to demand for e-commerce and consumer distribution. Construction has started to slow as building material prices increased during the COVID-19 pandemic, he said.

As of mid-July, the industrial vacancy rate in Cy-Fair was 14.4%, more than twice what it was four years ago, yet additional industrial projects totaling 2.5 million square feet are slated to be under construction through 2022. National brands such as The Home Depot and Amazon have set their sights on Cy-Fair to meet their distribution needs.

“We look forward to continuing our success in northwest Houston with this project that offers unique Highway 290 visibility,” Molto Properties Senior Principal Mike Powers said in a statement. “We’ve been pleased with the level of activity, highlighting how strong northwest Houston’s industrial demand has been.” 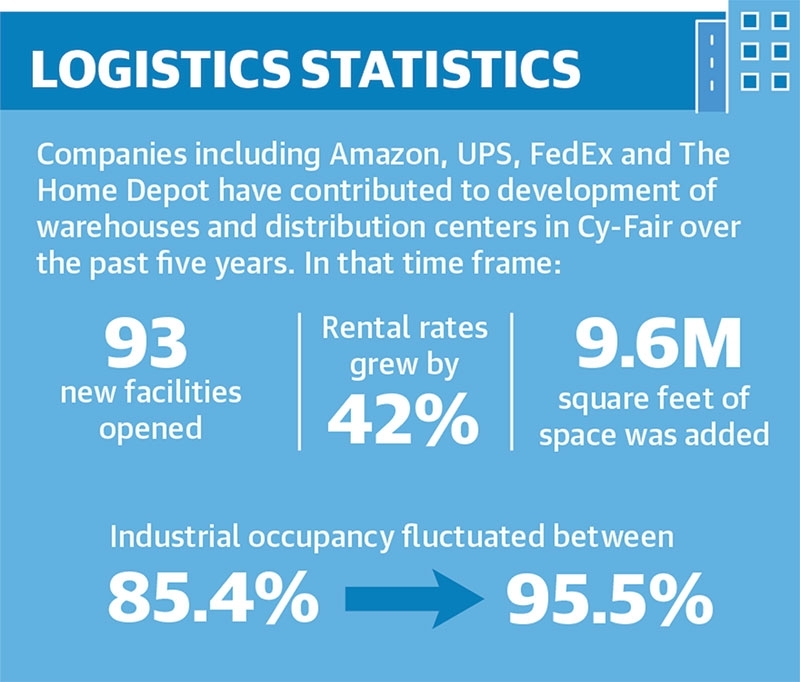 While these projects bring jobs to the community and support the economy, they can also contribute to traffic congestion and air pollution.

Andrea French serves as the executive director of Transportation Advocacy Group Houston, a regional mobility advocacy organization. She said daily commuters have already started to see increased traffic beyond the traditional rush-hour periods as they share the road with more delivery trucks. According to the U.S. Government Accountability Office, package deliveries increased 71% from June 2019 to June 2020.

“That rush-hour window begins to expand, and suddenly your backups are as early as 2 [p.m.] or as late as 10 [p.m.],” she said. “I think we’ve all experienced it where we’re like, ‘This is the middle of the day. What’s going on?’”

The rise in online shopping during the COVID-19 pandemic highlighted Americans’ reliance on logistics operators. Consumers spent $861 billion online with U.S. suppliers in 2020—up 44% from the previous year, according to market research firm Digital Commerce 360.

While there is some uncertainty about what behaviors will last beyond the pandemic, Jankowski said online shopping is not going away.

This growing trend is resulting in more warehouse and transportation jobs throughout the Greater Houston region, but Jankowski said traditional retail jobs are on the decline as fewer people are shopping in brick-and-mortar stores.

“If you’re out of dishwasher soap, why get in the car and drive to the store to get the dishwasher soap when you can order it and have it delivered the next morning?” he said.

Rachel Alexander, senior vice president of research at commercial real estate firm JLL in Houston, said the region’s industrial market has been accelerating since before COVID-19 with new tenants entering the market in the last three to five years.

Northwest Houston is the region’s largest industrial submarket, Alexander said, due to the opportunity for a range of industrial developments along the Hwy. 290 corridor and its major arteries such as Beltway 8, Hwy. 6 and the Grand Parkway.

However, she said it is common for industrial projects to break ground with no tenant in mind, which is why residents may notice facilities sitting empty for several months once construction is complete.

“Houston is not typically a strong market for preleasing,” Alexander said. “It’s not unusual for a building to deliver and then take 12-18 months to lease up.”

“What’s exciting about Houston is we don’t have zoning, so just when you think that we’ve pushed the limits of where we can go on industrial, we hear about a new project ... because the demand is so high, and companies want to be here,” she said.

This uptick in e-commerce activity has put a strain on the region’s transportation system, according to Bill Eisele, senior research engineer and mobility division head at the Texas A&M Transportation Institute.

“[Freight transportation] really is the backbone of our economy—being able to keep these goods moving on the roadways, the supply chains and logistics,” he said at a Cy-Fair Houston Chamber of Commerce meeting in June.

French said while typical commuters spent less time on the roads during the pandemic, that daily traffic is increasing again as they return to in-person work alongside a growing number of delivery trucks.

Monique Stephens is a Cy-Fair resident and administrator for the “All 290’d Up Traffic Reports” Facebook group, in which she said complaints from local drivers “outweigh the positive feedback.” She said she was not happy to learn about the new distribution center slated to open on Barker Cypress Road considering the traffic it will bring along the corridor.

“Traffic is already backed up currently ... There needs to be other routes to get people moving,” she said.

Projects such as the proposed I-45 expansion plan, which is on hold as of press time, are crucial to keep up with Houston’s growth and resulting traffic increases, French said.

Eisele said some companies are rolling out or plan to implement “space-age” delivery solutions to make deliveries more efficient. Examples include the Nuro R2 delivery robot used by Domino’s and some grocery store chains. Amazon also has several patents on future distribution channels, including underground and underwater warehouses and drone fulfillment centers on trains and in hovering blimps.

“There's a really large and global supply chain behind the person that shows up and provides you with that package. And really a lot of things have to go right for that package to get there, and most of the time it does,” he said. “There are huge implications when you're clicking on ‘next-day delivery’ or ‘same-day delivery,’ especially. ... It's something that is going to catch up [to] our transportation system at some point.”

Many of these warehouses are being constructed on open fields, wetlands or forested areas, so green space and natural habitats are lost in the process.

Large-scale distribution centers often replace rainfall-retention areas with impervious cover, or surfaces that do not absorb rainfall, said Ryan Bare, a research scientist specializing in watershed ecology at the HARC. This increases the risk of flooding in neighboring developments.

“You have a flashier event as well as a higher volume event that is then heading downstream through the watershed as a result of having increased development and impervious cover,” Bare said.

Beydoun said the heavy-duty diesel trucks traveling between those logistics facilities emit poisonous nitrogen oxides and carcinogenic diesel particulate matter. These emissions contribute to poor air quality, which can cause health issues, including coughing, asthma, irregular heartbeats and other problems, he said.

“It’s not just the big, bad industry—although that is a problem. It’s these seemingly benign facilities with heavier-duty trucks, especially when they’re being built this rapidly and to the scale that you’re seeing now,” he said. “These are massive warehouses with dozens and dozens of bays and trucks coming in and out 24/7.”

But some companies are working to mitigate these environmental consequences. Best practices include taking advantage of large rooftops to install solar panels, maintaining higher building standards that are more energy-efficient, replacing diesel trucks with cleaner vehicles and following the county’s drainage criteria to capture more detention, according to Beydoun.

Earlier this year, FedEx Corp. announced plans to become carbon-neutral by 2040, and UPS committed to being carbon-neutral by 2050. Goals include phasing in electric vehicles, offering more sustainable packaging solutions and investing in renewable energy.

“The sooner we can start moving forward, the less of a problem we’re going to have to address down the road,” Beydoun said. “You don’t have to go from zero to 100 immediately; there are incremental steps that you can take along the way which will significantly benefit these facilities.”