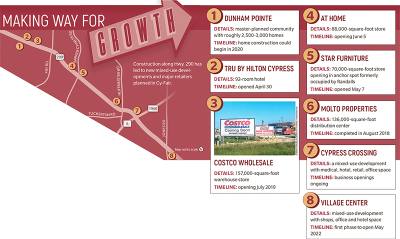 As Hwy. 290 construction nears completion, developers have announced or started work on several major projects along the corridor. From Costco Wholesale off Mueschke Road in Cypress to Village Center off Jones Road in Jersey Village, several new projects are underway, spanning residential and commercial purposes.

Williamsburg Enterprises has owned 16 acres of land next to an H-E-B since 2013 on Barker Cypress Road and Hwy. 290. Home goods store At Home is slated to open at this site over the summer, and officials said a retail shopping center will be built on the remaining 8 acres.

“There’s not much left undeveloped at this intersection,” Williamsburg Chief Operating Officer Jason Ford said. “We anticipate leasing to tenants that will provide services to the community rather than simply selling goods.”

After the Randalls grocery store at this intersection closed in summer 2018, Star Furniture & Mattresses signed on to take its place. With this tenant and At Home on board, Williamsburg developers said other new businesses would be drawn to this corridor.

“Prior to the widening of [Hwy.] 290, the lengthy commute times caused some residents to look elsewhere,” Ford said. “However, now that [Hwy.] 290 is nearing completion, we believe the community will continue to grow and attract new retailers.”

Jersey Village city officials in March announced plans for a new mixed-use development called Village Center at Hwy. 290 and Jones Road. Plans had been in place since at least 2010, but officials said they wanted to wait until enough progress had been made on Hwy. 290 to move plans forward.

Construction could start as soon as early 2020 once developer Collaborate completes the design phase.

“Our family-oriented suburbs typically offer more space, privacy, safety, quiet and better schools,” he said. “For many of the younger buyers—the millennials—those factors still exemplify the American dream, and they’re associated with comfort and stability.”

Village Center will meet these same needs, he said, with 43 acres of retail, residential, dining, office and entertainment options. The space will also be walkable with improvements to area streets, sidewalks, green spaces, parks and trails.

At Hwy. 290 and FM 1960, Caldwell Companies continues to develop Cypress Crossing, where multiple new eateries have announced plans to open later this year.

“Now that [Hwy.] 290 is nearing completion, we believe the community will continue to grow and attract new retailers.”

At the same site, Kelsey Seybold broke ground on a four-story, 75,000-square-foot medical office building in late 2018, and Staybridge Suites plans to progress on a new three-story, 115-room hotel this year at the intersection. Another 64,000 square feet of space for restaurant, retail, office and professional services will also be underway this year, according to Caldwell officials.

“Concerning commercial and residential development along [Hwy.] 290, TxDOT is aware that both types of development have increased, especially between the Cypress and Waller areas where there is more undeveloped land,” she said.

George said all Hwy. 290 main lane work—with the exception of the bridge at Hwy. 6 and FM 1960, where some work has been delayed due to utility challenges—should be completed by the end of 2019.

The purpose of the Hwy. 290 improvement project was to reduce traffic congestion and improve mobility and safety. Before construction began, George said on a scale of A-F, some areas of Hwy. 290 had a Level of Service rating of F for congestion levels during peak hours. This is defined as “unacceptable stop-and-go congestion,” she said.

Houston TranStar reports the average speed in the areas where main lane construction is completed has improved by about 15 miles per hour.

In general, developers said as Hwy. 290 construction comes to an end and mobility and travel speeds continue to improve in Cy-Fair, both residential and commercial growth will benefit.

“Additionally, the retailers were definitely holding out while waiting for the construction to wrap up,” Ford said. “Now that it is nearing completion, we believe that you will see another round of retailers coming to Cy-Fair.”