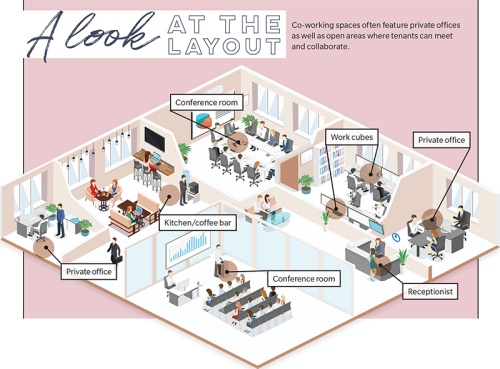 As more businesses launch in Cy-Fair, rental rates in the area and the cost of opening a space have become more expensive, leading to alternate options for entrepreneurs.

A handful of new office spaces specially designed for co-working have cropped up in Cy-Fair over the past few years, giving residents of the bedroom community an alternate option to traditional offices. New facilities include Workspace Suites and The Work Well—which opened in December—and The Work Lodge, which opened in June 2015.

As a result of rising costs, some business owners have turned to co-working spaces. Co-working spaces offer members the option of renting an office space for a flat rate with a receptionist, furniture and other perks included. Developers and tenants said upfront costs are lower, offices are often closer to home and the experience provides an opportunity to collaborate.

“It’s a great way to get out of the house, meet people, talk to people, do a lot of networking and focus,” said Rodrigo Camus, the CEO of Pro Car Sketch, which has had an office in The Work Lodge for two years.

Coy Davidson, senior vice president of office services with Colliers International, said co-working is appealing to startups looking for a cheaper, faster way to get an office up and running.

“Flexible work is probably the biggest perk that employees want right now,” he said. “[Employers] have recognized that, so now they’re even starting to put their people in the co-working space. They have the opportunity to be around other people and have this great environment to work in and don’t necessarily have to sit in traffic all of the time.”

Herman Ayala, who launched Workspace Suites with his wife, Alba, said he believes the increases in rent and overhead costs are driving businesses to embrace co-working spaces.

Leasing space at a traditional office entails signing a lease with a landlord and filling the space with amenities and furniture out of pocket, Ayala said. Smaller businesses look to co-working spaces because they do not have to take as steep of a financial risk.

Ayala said he saw a need for office space closer to home that allows business owners to share resources, such as conference rooms and receptionists.

“As a small-business owner, to go to an office and have to build out those [amenities] is tripling or quadrupling the amount of space that I would actually need,” Ayala said.

Camus, who previously worked out of a coffee shop, said moving into The Work Lodge did not cost him much more than what he was already spending.

“I was spending easily $200 at Starbucks every month,” he said. “If I paid $300 a month here, I have a fixed space, I have internet, I have coffee and everything. It was a pretty good deal for me.”

Costs to rent space at a co-working office vary depending on the type of office needed. Unlike a lease, memberships can be modified and changed depending on needs.

A virtual office at Workspace Suites—which includes a physical mailing address and access to events and meetings rooms—costs $80 a month. For  $650 a month, members get a private office with janitorial services, a receptionist, 24/7 access and other office amenities.

Although the concept of co-working is relatively new to the Greater Houston area, Davidson said the option has been available on the East and West coasts for years. He said he is not surprised the idea is attractive in Cy-Fair.

“We have these little clusters popping up where startup communities are starting to try to come in,” he said. “We’re very spread out and we don’t have the same urban environments as a downtown Chicago or New York City.”

At The Work Lodge, companies of different sorts work within close proximity to each other, including Hewlett-Packard Co., a cryotherapy office, a church and technology company.

Amy Walker, the CEO of Advanced Quickbooks ProAdvisor, who rents space at The Work Lodge, said co-working gave her access to a professional office and meeting spaces at a low price.

“Sometimes small businesses run out of their house, and that’s not the safest environment,” she said. “It’s not professional, either. So, this was the perfect solution.”

Although co-working spaces are filling a void in Cy-Fair, market experts said traditional office spaces are still going to be the logical choice for many businesses, particularly larger companies or companies that expect to grow.

The average Cy-Fair area rental rate of $22.04 per square foot is higher than the average rate of $18.98 in Spring-Klein but lower than the $21.76 rate in The Woodlands, according to data from area real estate companies

Davidson said co-working spaces can be more costly in the long run. Although the rent per month may be considerably cheaper upfront, the price for the space itself is more expensive, he said.

“From [a] pure cost-per-square-foot [perspective], it’s more expensive to be in a co-working operation,” he said. “They’ve got to make a profit somehow, so there’s going to be a markup from that alone. Then [you have] all the infrastructure costs like the copying equipment and the amenities they provide, so they have to push the price up.”

Brad Fricks, senior vice president of Stream Realty and landlord for Remington Square—an office building built on Beltway 8 in 2015—said traditional office space may be more worth it in the long run for growing businesses.

“You can go get your own office space and have your own person answering the phone system, and it costs less than if you’re having all of those employees in a co-working environment,” he said.

Mike Thakur, owner of The Work Lodge, said some former members have left for larger spaces. One of the first startups to rent space started to grow at a rapid pace and eventually left, he said.

“They built their own lab facilities and they ended up moving all their stuff so they could be with the lab,” he said. “We don’t have the space for a lab.”

Davidson said the idea of a satellite office does not appeal to every company.


The future of business spaces

Thakur said as long as small-business owners and commuters have a need for satellite office locations, co-working will continue to have value.

Fricks said the chances of all co-working businesses surviving is up to performance, but he sees operations with prime locations thriving.