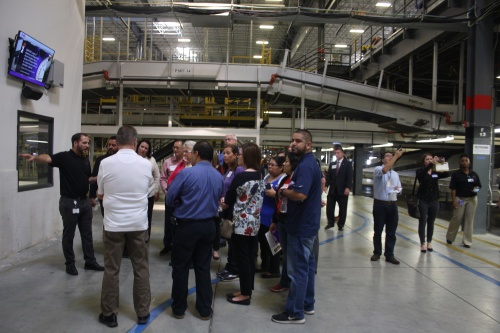 Officials with FedEx Ground, a subsidiary of FedEx Corp., celebrated the grand opening of a new 800,000-square-foot ground distribution hub Oct. 26 along with leaders in the Cy-Fair and Houston business communities.

The facility, located at 8787 W. Grand Parkway N., Cypress, is the company’s largest ground hub in Texas. It serves as a major piece of a FedEx Ground network comprised of more than 590 facilities, including nine others in the Houston area.

“Bringing this facility to Cy-Fair took a lot of work,” said Steve Griffin, FedEx Ground’s vice president of operations for the Gulf Coast region. “This new facility will help create a more prosperous future for our company, employees, business partners and the surrounding area.”

The investment in Houston was a strategic move to boost the speed at which packages are processed and delivered, Griffin said. Packages will reach 83 percent of U.S. destinations within three days, he said.

Brady Bates, FedEx Ground senior manager at the Houston hub, said the Cypress area was chosen for several reasons, including nearby access to the Grand Parkway and a growing labor force.

Although the grand opening was Oct. 26, the facility itself opened in August and workers began processing packages in September. Workers sort packages that come into Houston from around the U.S. in addition to preparing packages for delivery, Bates said.

“All packages that come into Houston go through this hub,” he said.

Bates said workers are able to sort an estimated 22,000 packages per hour across the facility’s 38 docks. The hub will operate between 14-16 hours each day, depending on package volume, he said.

FedEx officials planned to bring in 400 employees when the facility opened, and that number has already been surpassed, Bates said. He estimated that a mix of around 500 full-time and part-time employees have been hired, and said the company is preparing to ramp up hiring efforts before the holiday season, when as many as 700 additional seasonal workers could be brought in to staff distribution centers in the Houston area.

Both the Greater Houston Partnership and Cy-Fair Houston Chamber of Commerce played key roles in bringing the facility to Cy-Fair.

Bob Pertierra, GHP’s chief economic development officer, said FedEx’s choice to build in the Greater Houston area reaffirms the city’s position as one of the top logistics hubs in the U.S. He said the choice also made sense given the large number of goods being exported from Houston, which he attributed to the region's manufacturing sector.

“We still make things in Houston, so we have goods flowing out,” Pertierra said. “It is also important for Houston companies. This will enhance the incredible speed and access to customers and markets that Houston companies already enjoy.”

Future expansions at the facility will take place as demands for services in the area increase, officials said. The next phase of the project involves expanding the distribution center to more than 1.1 million square feet and employing more than 1,000 people while processing about 500,000 packages daily.