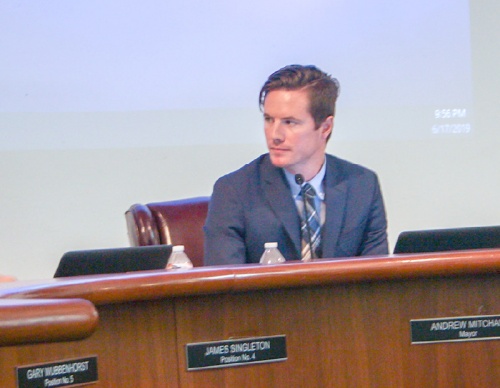 After spending eight years in the military, Andrew Mitcham decided to return to the community he grew up in to start a family. He and his wife, Michelle, returned to Jersey Village in 2011. After the birth of their two daughters, Mitcham said he started to feel the same calling to serve that drew him to the military. This time, the calling was more local.

Mitcham served on Jersey Village City Council for four years after being elected in 2015. In May, he took on the role of Jersey Village mayor after running unopposed. Mitcham said he is looking to tackle a variety of projects in his first term as mayor but said his decisions will be guided by one central principle: serving the citizens of the city as best he can.

What are your goals for your first term as mayor?

I want to make sure that our flood mitigation projects actually start seeing dirt moved. It’s been a learning experience having been involved with flood mitigation from the very beginning, formulating the plans [and] submitting them to different agencies. As a person who flooded, every rainstorm elevates your blood pressure a little bit.

The Village Center is really important to me as well. On [June 24] we approv[ed] a master development agreement and revised Chapter 380 agreement. From there we can probably have some groundbreakings going on this fall. I just really want to keep Jersey Village on this upward trajectory.

What are your thoughts on increasing homestead exemptions?

Are there any topics coming up in the future that you think could spark some debate on council?

Do you agree with plans to move City Hall to the south of Hwy. 290?

As someone who grew up in Jersey Village and who probably goes to City Hall more than anybody else, I’m not too worried about it. We have to have a city government that is not constrained by a building. We have to make sure that they are getting their work done properly in a safe, productive environment. We just don’t feel like we’re able to do that in its current location. It’s also trying to combine that functionality with a community rallying spot, an open green space, an area for festivals. We did receive a lot of very good feedback to make sure we keep our focus on what matters most, which is making sure our citizens are safe and that they have all the tools they need to live a happy life in Jersey Village. That’s our primary focus, and that will never change.

Three months in, how would you describe the overall feeling of serving as mayor?

I’m just really excited to represent my hometown. I love Jersey Village, and I love the people and all the amenities. I just want to protect it and shine light on it for the region and do the best we can to make sure that my kids, when they grow up and they are looking to start their families, that they consider Jersey Village as well. That would be the biggest legacy.