Jersey Village threatens motel with condemnation, demolition if improvements are not made 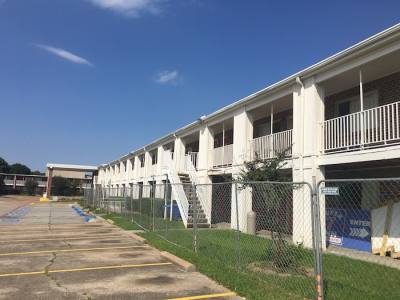 The city of Jersey Village is threatening the owners of a Super 7 Inn on Hwy. 290 with condemnation if improvements are not made by a set deadline.

Correction: A previous version of this story identified Christian Somers as the Building Inspector with the city of Jersey Village. His actual title is Building Official.

The city of Jersey Village is giving owners of a Super 7 Inn within city limits until Nov. 9 to address a variety of health and safety concerns before officials said they would condemn the building and possibly demolish it.

Christian Somers, the city's building official, said the building is in violation of several city codes, including the plumbing, electrical and building codes. Issues include mold found in rooms, evidence of vermin activity, missing air-conditioning units, and structural issues such as degrading balconies and missing column-to-roof connections, Somers told Jersey Village City Council at a May 13 meeting.

The property is owned by Jersey Village Lodging LLC. Owners bought the property—located at 16884 Hwy. 290 near the Jersey Drive intersection—from Motel 6 in June 2018, Somers said. At the time, they determined that roughly 50 of the 119 rooms were rentable and planned to use the cash flow from renting those rooms to make repairs to the other 69 rooms, a plan Somers said was never shared with the city.

“You cannot let a room next to a room where there’s mold and mildew, … where there are opening penetrations, where doors are not secured, where ceilings are open, where they are missing plumbing fixtures, etc.," Somers said. "I don’t believe there are 50 rooms that can be let there. [I believe] ... right now it’s zero.”

The city sent a letter to the property owners April 26 notifying them that condemnation proceedings were being initiated.

Owners submitted a plan for making improvements to the property April 30, but Somers said several key components were not addressed. The asbestos survey only covered the exterior of the property, the room-by-room assessment appeared to miss necessary improvements, a soils report was not included and plans for balcony reconstruction were illegible, he said.

Luke Beshara, an attorney hired by the property owners, said the issues with the property can be attributed to neglect from the previous Motel 6 owners. The new owners have been working to rectify the issues, he said.

"My client did not buy this to watch the property deteriorate, did not buy it to watch it sit vacant, did not buy it for any other reason but to turn it into a class one facility that everyone can be proud of," he said. "We will work hard and make sure that whatever Mr. Somers needs in order to evaluate our proposals, he obtains, and that we do what we need to do to make sure that this property meets the satisfaction of Mr. Somers and more specifically complies with the requirements of the city of Jersey Village codes."

Beshara said items missing from the April 30 plan will be provided within reason, and more legible plans would be submitted for the balcony reconstruction. He said the property owners are prepared to invest in the improvements and no longer plan to rely on cash flow from the motel.

The city initially planned to provide the property owners with 90 days to address the issues, but Beshara said that would not be enough time. Beshara requested the owners be allowed to make renovations in phases and that the council table the issue until the next meeting to allow time to come up with realistic deadlines for each phase.

"We want to get this done right," he said. "We want it done quickly, too, ... but you don't want it slapped together."

The council ultimately agreed to extend the timeline beyond 90 days, giving the owners 180 days to make the renovations. However, several council members questioned the dedication of the property owners to actually address the problems.

"To purchase that type of property with that lack of due diligence, I kind of view as indicative of ... how the owner is going to handle that property from the time of purchase on," Council Member Greg Holden said. "I don't care what the owners say—it's what you do, it's the actions that we see. [The renovations] should have started the day the owners purchased the property, not 10 months later."

Kristah Slate started Acton Academy Cy-Fair in 2019 with a campus near Jersey Village, and the school is set to launch a second location this fall.

West Road widening expected to wrap up in August

The widening project between Fry and Greenhouse roads is estimated to cost $1.87 million.

Throughout the pandemic, Tuscany has adapted by signing up to platforms such as Uber Eats and DoorDash, creating a patio for outdoor seating, and bringing in live music on Fridays and Saturdays.

Several Cy-Fair road widening, extension and improvement projects are currently underway. Here's a preview of some projects planned for the future.