MAP: See where new gateway signs will be constructed in Jersey Village 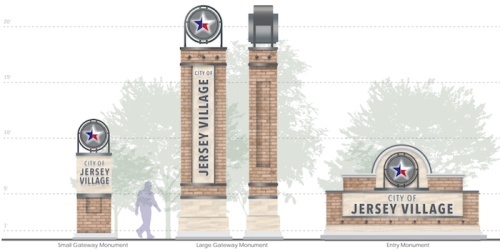 New gateway signs will be built in Jersey Village featuring a brick facade and the city's red, white and blue star.

Jersey Village City Council members sat in on a series of budget workshops in July, and the proposal that emerged for the 2018-19 fiscal year includes $1 million for new gateway and entrance signs to be built throughout the city.

The new signs were a priority of the city's comprehensive plan—adopted in 2016—with the goal of improving community character. The city contracted with Clark Condon Associates for $60,000 last August on a Gateway and Wayfinding Master Plan.

The project is proposed to be carried out in phases, with another $1 million proposed to be set aside for fiscal year 2019-20. The installation timeline is yet to be finalized, but could begin in late 2018 or early 2019.

View the map below to see where various signs and monuments will be built. Wayfinding elements, including new street signs and an informational marquee, are not included on this map.