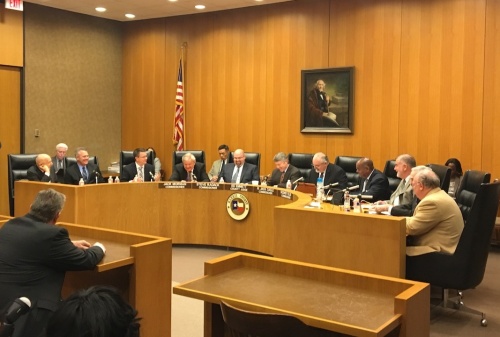 According to the meeting agenda, commissioners voted Tuesday to send a letter to Gov. Greg Abbott, requesting his approval of a special election Aug. 25 for the bond referendum.

If the request is approved by Gov. Abbott—and the referendum is approved by voters Aug. 25—the bond referendum would provide funding for flood mitigation studies and projects by the Harris County Flood Control District.

Commissioners voted Tuesday to seek a special election after months of discussing a potential bond referendum. The Aug. 25 election would occur on the first anniversary of Hurricane Harvey.

Additional dates for a special bond referendum election were also discussed Tuesday, including June 16, November and May 2019 elections. However, county officials said a May 2019 election would be too late to provide flood mitigation funding and a June election too early to get the word out to voters.

County Judge Ed Emmett said if the election were to happen later than Aug. 25, he would not run for re-election in November due to the urgency of the bond.

“I will not run for re-election if there is a bond election in November,” he said. “I campaign for the bond [referendum]."

Bond referendum talks came up in late March after officials with the HCFCD said they would need millions of dollars to match funds available through the Hurricane Harvey Hazard Mitigation Grant Program. The grant money, which comes from the Federal Emergency Management Agency, is part of a federal package to help states affected by natural disasters in 2017 pay for projects to prevent damage in future storms.

Bond money could also help fund a study into building underground tunnels to transport rain water away from flood-prone neighborhoods.

The goal of the tunnels would be to help several of the major waterways in the Houston area—possibly including Buffalo Bayou, Clear Creek, Cypress Creek, Greens Bayou, Halls Bayou, Hunting Bayou and White Oak Bayou—to stay within their banks during a 100-year storm, reducing flooding in nearby neighborhoods. Exactly where they would be built and where the water will drain are still to be determined, county officials said in March.

HCFCD Executive Director Russel Poppe said March 27 that the study itself, which was approved by commissioners at the March meeting, would likely cost hundreds of thousands of dollars, and to cover flooding projects and relief would cost an estimated $2.5 billion.