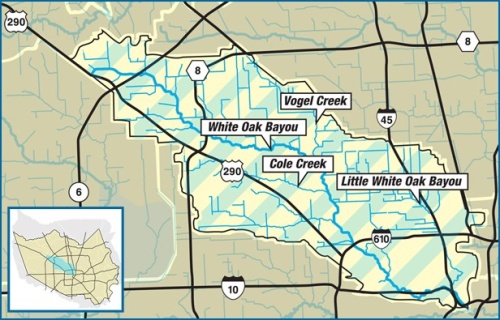 At a March 27 meeting, Harris County commissioners advanced several area flood projects, one of which has been a long time coming for Jersey Village residents.

Based on a recommendation from the Harris County Flood Control District, commissioners authorized the county to begin negotiations with Cobb, Fendley & Associates on engineering services for channel improvements along White Oak Bayou between Tidwell Road and FM 1960, including the part that runs through Jersey Village.

The news brought relief to city officials in Jersey Village, which was spared during Hurricane Harvey but experienced flooding at 238 properties during the Tax Day Flood in 2016.

"We are very excited that the commissioners court approved this request from HCFCD," Jersey Village City Manager Austin Bleess said. "We are hopeful that the negotiations move forward quickly and that they can move into the design and construction phase soon."

Bleess was among the speakers to express support for the project during the public comment portion of the meeting. He said the channel improvements were identified in a longterm flood recovery plan the city adopted in 2017, but the city itself had little power to move things forward without the county's help.

Of the 163 homes that would flood in a 100-year event in Jersey Village, about 62 would be removed from the 100-year floodplain by completing the White Oak Bayou improvements and a second project to expand storage capacity at the Jersey Meadow Golf Course, according to the study.

Jersey Village Councilman Andrew Mitcham, who also spoke at the meeting, said city residents find themselves in a sort of bottleneck, where the portion of the bayou is narrower in Jersey Village than it is upstream and downstream. He said the key to preventing floods is bayou capacity.

"At some point the bayou stops being our friend and it starts being our enemy," he said. "[This project] improves the efficiency and capacity of the bayou, allowing the bayou to stay our friend for longer."

Work on the project—officially called the White Oak Bayou Federal Flood Damage Reduction Project—started in 1998 as a collaboration between Harris County and the U.S. Army Corps of Engineers, but has been stalled for the last few years due to a lack of funding. Jersey Village benefited from previous parts of this project—including a bypass channel completed in 2010 and a detention basin completed in 2014.

The improvements that were set in motion at the March 27 meeting represent the last major piece of the puzzle. Because the USACE has already partnered on the project, HCFCD officials are hopeful it will benefit from a boost in funding for the USACE intended to help areas affected by hurricanes in 2017.

County officials told Bleess the design process would take about one year to complete, and the construction process could take an additional year.

Michael Stembridge, who also spoke at the meeting, said his house flooded during Tropical Storm Frances in 1998, Tropical Storm Allison in 2001 and the Tax Day Flood in 2016, and that water came within feet from the door during Hurricane Harvey.

"We think that this will be our saving grace," he said. "We really are begging for it.”